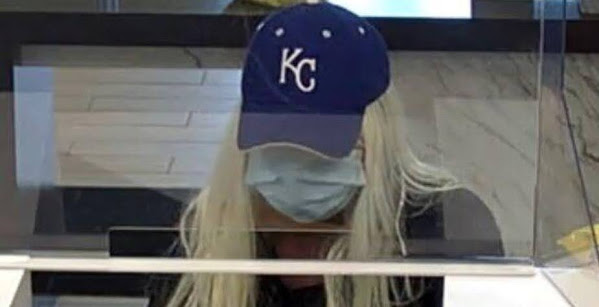 Right now we feature local crime news links, ALLEGED misdeeds and court info along with deets on a local baseball fan who has given up on life in polite society . . .

KANSAS CITY, MO (KCTV) -- The authorities are investigating a bank robbery that happened Wednesday afternoon. According to the FBI, it happened around 2:30 p.m. at the Bank of America branch at 10731 State Line Road. No one was injured. The suspect is described as a black female in her mid 30s to 40s with a medium build.

INDEPENDENCE, MO (KCTV) -- A driver behind the wheel of a stolen car slammed into another vehicle in Independence then took off. Police found the ditched stolen car but have not arrested the suspect. On Sunday just before 12:30 p.m., the driver of the stolen car was seen on home surveillance speeding down a neighborhood street.

KANSAS CITY, Mo. - A Kansas City man has been sentenced to 15 years in prison after attacking a federal agent who was working undercover. Nicholas Newman, 20, pleaded guilty to charges of forcible assault of a federal officer using a dangerous weapon and to carrying a firearm to commit a violent crime in May, according to a release from the U.S.


Kansas City mechanic says customer tried to run him over, but he's been charged now

KANSAS CITY, Mo. - A Kansas City mechanic says he's facing charges because one of his customers lied about him, and he says that's not all she did. "And I felt it with her eyes, and I felt it with her voice that she did not want me in this world no more," Juhbear Kitara said.