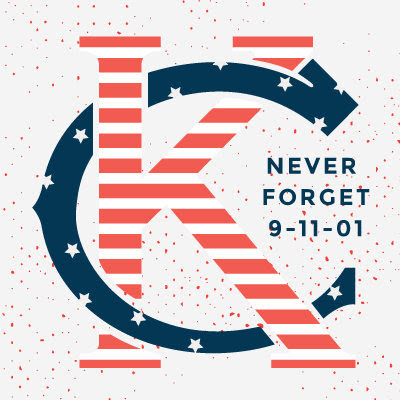 The commemoration of a perpetual 'war of terror' will dominate news content starting now.

Some of the local angles are captivating, others are forced.

What we notice is a very obvious effort to steer clear of recent WHITE HOUSE FAIL in Afghanistan and the implications going forward as the dominant American military was ordered to retreat and now seem hampered in confronting the threat of terrorism by way of occupation.

A traveling memorial to remember the victims and the heroes of 9/11 made a stop Wednesday in Kansas City. It's part of a project started 20 years ago to make sure Americans never forget. Kansas City firefighters and veterans were part of a silent ceremony unveiling a massive U.S.

The security checks at Kauffman and Arrowhead Stadiums are among the most enduring signs of how much security has changed since the terrorist attacks on the World Trade Center and the Pentagon 20 years ago. And steps toward insuring a safe environment at sporting events are constantly evolving.

OVERLAND PARK, Kan. - Whenever Laeeq Azmat hears about an attack, he hopes it doesn't involve a Muslim. "If something else happens and there is somebody else involved, it is just terrorism," he said. "But if a Muslim is involved, it becomes the whole Muslim community is blamed for that."

Even 20 years later, the 9/11 attacks still shock KC's conscience. What has changed?

Twenty years after the devastating attacks of 9/11, former Kansas City FBI spokesman Jeff Lanza joins Dave Helling and John Holt for this edition of "4Star Politics." Lanza discusses the region's reactions that day in 2001, and what has changed - or hasn't changed - since.

Where were you on 9/11? We asked Kansas Citians to share their stories

Anyone old enough to remember 9/11 has a story of where they were when the world trembled. Here are eight from Kansas Citians. I stood looking up at a television in the Kansas City Star 's newsroom a little after 8 am local time when a second plane struck the World Trade Center.

KANSAS CITY, Mo. - One Kansas City journalist was trying to write about what the world was watching on Sept. 11, 2001. During that daunting assignment, he got the news that changed his job and his life. Now, 20 years later, he's written a book.

KANSAS CITY, Mo. - The Kansas City Chiefs will be among teams to observe 9/11 remembrances as part of Sunday's season opener against the Cleveland Browns at GEHA Field at Arrowhead Stadium. On Tuesday, the league announced that viewers watching any of the games in the noon window on CBS and FOX will see a tribute video narrated by actor Steve Buscemi.