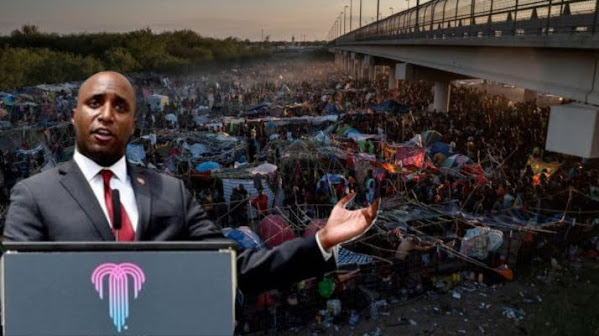 Amid a crisis on the border, once again Kansas City could soon be receiving new guests.

Debate over whipping and chasing down refugees has sparked a new wave of advocacy and a call to action.

Already Mayor Q has welcomed Afghan refugees and his progressive housing/camping policies have inspired many new homeless residents to make their home in Kansas City.

And so . . . A great many local advocates don't think welcoming even more new guests would be such a stretch.

Haitian migrants and refugees cross the Rio Grande - in pictures

In the past few weeks more than 12,000 Haitians have arrived in Del Rio, Texas, gathering in a huge makeshift camp. Many have to cross the Rio Grande from Del Rio to Ciudad Acuña to seek food and supplies in Mexico to bring back to family members waiting in the US.

Shocking images of horse-mounted officers corralling Haitian migrants along the US-Mexico border are evoking dark comparisons to US slavery and the country's historical mistreatment of black people. The widely shared images, taken by an AFP photographer earlier this week, appear to show US Border Patrol agents on horseback using their reins against Haitian migrants and pushing them back towards the Rio Grande river that divides Texas and Mexico.

A tense situation in Port-au-Prince occurred Tuesday when many deported Haitian migrants expressed anger and some even tried unsuccessfully to get back on a plane returning to the U.S. The Department of Homeland Security confirmed to Fox News Tuesday that three U.S.

The US is flying migrants out of a Texas border town where 13,000 have gathered in makeshift camps.

A three-decade-old clip of US president Joe Biden saying "it would not matter" if Haiti sunk has resurfaced as his administration faces a backlash for its handling of the influx of Haitian migrants. The remarks were made by Mr Biden in 1994 during an interview with PBS when he was the senator for Delaware.


Some Haitians at U.S. border released, others deported as pressure builds on Biden

Amid deteriorating conditions in migrant camps on both sides of the U.S.-Mexico border, U.S. authorities on Wednesday tried to deal with thousands of the mostly Haitian migrants that have gathered, releasing some in south Texas while deporting others on flights.