Cursed Kansas City Chiefs Fight To Save The Planet!!! 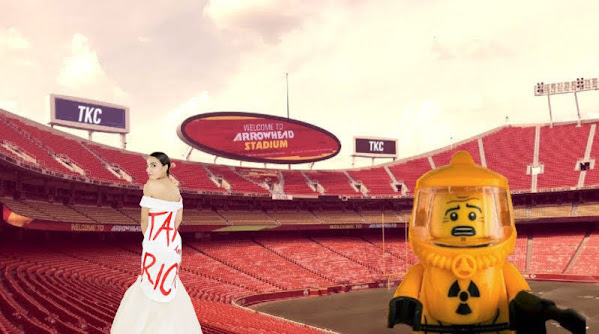 Super Bowl losers always have a tough time making it back to the big game and it seems the Kansas City Chiefs would rather focus on battling climate change than the running game of their opponents.

CHECK THE KANSAS CITY CHIEFS WORKING TO SAVE THE EARTH FROM TAILGATING FANS!!!

It's a noble effort that might or might not put off the end of the planet in less than 12 years.

"We've made it a long-term goal to become a more environmentally conscious organization, and while significant change doesn't just happen overnight, we've made countless strides in our recycling and sustainability efforts over the years," said Chiefs President Mark Donovan. "Often times, this work goes unheralded and unnoticed because so much of it happens behind the scenes, but it's important to recognize our stadium operations team, our stadium services team and our community allies who make our facilities and our tailgating atmosphere as environmentally friendly as possible."

I guess saving the planet might be more important that winning another Super Bowl.

Here's a peek at the effort which attempt to sell environmentalism to fans who eat hamburgers and hot dogs by the pound then wash it all down with endless streams of craft beer. Far be it from TKC to stereotype but these folks seem gleefully unconcerned with anything even remotely connected to sustainability . . .

From energy efficiency to waste diversion, the Chiefs have made our environment a priority A game day at GEHA Field at Arrowhead Stadium is unmatched in sports, from the tailgating atmosphere in the parking lots to the energy inside the building's walls.

Even better . . . Here's statistical proof that Patrick Mahomes is haunted by the ghost of the-very-much-alive Todd Blackledge.


Can Kansas City Beat The Curse Of The Super Bowl Loser?

Is there a Super Bowl Loser's Curse? That question will confront the Kansas City Chiefs throughout the 2021 season after their defeat last February at the hands of the Tampa Bay Buccaneers.

Kansas City Chiefs starting defensive end Frank Clark is out for Sunday's game against the Los Angeles Chargers with a hamstring injury, sources told ESPN's Adam Schefter. Clark strained his hamstring in practice on Thursday and was listed as doubtful to play.


Take a deep breath: there's no reason to panic about the Chiefs' defense

After the Kansas City Chiefs lost a close game for the first time in 679 days - giving up the second-most points in a contested game since defensive coordinator Steve Spagnuolo's arrival in 2019 - many observers have concluded the team's defense is truly bad.

The atmosphere is ripe for a few lies at this point heading into Week 3. Not only are the K.C. Chiefs coming into the season with more expectations than any other team, but they're also fresh off of a couple highly-charged wins after Week 2.

A heartbreaking fumble in the most crucial situation sealed the Kansas City Chiefs' fate last week against Baltimore, but the adversity isn't holding the team back moving forward. Head coach Andy Reid has spoken on his commitment to getting his defense turned in the...

by: Makenzie Koch Posted: / Updated: KANSAS CITY, Mo. - Two local celebrities will be cheering on the Kansas City Chiefs in person this Sunday at Arrowhead Stadium. Signer-songwriter and Leavenworth native Melissa Etheridge will perform the national anthem before the Chiefs take on the Los Angeles Chargers.