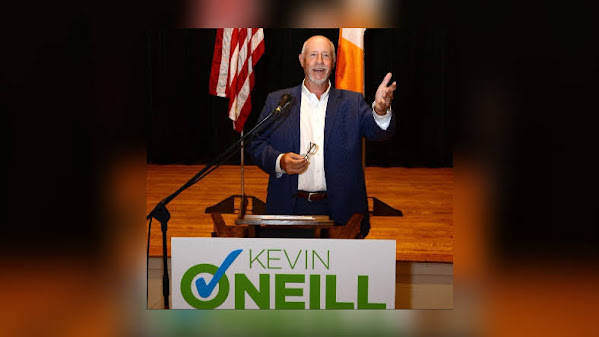 First District Councilman Kevin O'Neill billed himself as a union dude despite the fact that he hasn't lifted anything heavier than a pencil in the past 20 years.

He describes himself this way . . .

"Kevin has been the publisher and editor of the Labor Beacon Newspaper for nearly 30 years covering both national and local politics."

Have you ever read that publication?

It's a union tract that also makes an incredibly convenient beer coaster in order to keep union halls tidy.

Whilst it may seem cruel to clown the councilman's career . . . It's obvious that he never really believed much of it given that his New KCI stance is decidedly anti-labor according to critics.

Here's what the newspaper won't emphasize but still matters to local leaders . . .

Behind the scenes slick consultants are making a ton of promises . . . Meanwhile, every other vendor already has a union deal in place.

Here's why we think the council dude deserves to be called out in particular . . .

KEVIN O'NEILL RAN AS UNION ADVOCATE AND NOW HE'S SELLING OUT LABOR AGREEMENTS IN ORDER TO PLAY NICE WITH INSIDERS PUSHING THIS DEAL!!!

Remember, TKC is (trying to be) being nice about this one and so many local lawyers and union dudes are using terms that are much harsher when it comes to this embattled council dude.

In his short career as a politico . . . Mr. O'Neill has shown a stunning weakness for wanting to be liked and respected by his more powerful colleagues.

Having friends is nice.

The biggest deal in Kansas City history and it's impact on workers across the regions can hinge on Kevin O'Neill's insecurity and stunning naivete.

Fact is . . . There are better deals for labor on the table and Mr. O'Neill isn't speaking up for people he promised to represent.