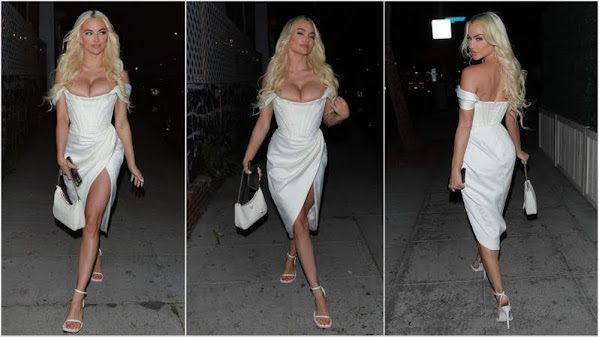 Right now was offer tribute to hottie Lindsey as the local pandemic becomes so serious that a country music legend could be cancelled . . . Check the links as we gather info from pop culture, community news and top headlines.

NASHVILLE, Tenn. - Country star Garth Brooks will continue on his stadium tour for now. But his team announced that during a three-week break, they would assess the status of the COVID resurgence and decide whether or not to continue performing. Brooks and his band are set to play Kansas City, Missouri, on Aug.

by: Heidi Schmidt Posted: / Updated: KANSAS CITY, Mo. - Jackson County lawmakers approved a plan to shift money to pay for a massive gas bill left over from the February freeze. The Jackson County Legislature unanimously approved the transfer of more than $174,000 to cover a gas bill owed by the county's family court.

A police standoff possibly connected with a reported shooting and crash Tuesday morning has ended, Kansas City police said.Authorities said that just after 3 p.m., police officers entered the townhome and found no one was inside.Kansas City police said that just after 10 a.m., officers were called to Truman Road and Bennington Avenue on a reported shooting.While officers were one their way to the area, police said they received a separate 911 call stating there was an injury crash at the same location.

Investigators said they corroborated the claims of 11 women who accused Mr. Cuomo of inappropriate behavior, from suggestive comments to instances of groping. Gov. Andrew M. Cuomo sexually harassed 11 women, including current and former government workers, whose accounts of unwanted touching and inappropriate comments were corroborated in a damning report released on Tuesday by the New York State attorney general, Letitia James.


Former Prez Trump Kingmaker After All

A former coal lobbyist who started his first run for office relatively unknown, Carey played into the former president's support during his campaign, stating on his website that he would bring back "America first" policies. Carey ran on a fairly conventional Republican platform against congressional Democratic policies on spending, renewable energy, abortion and immigration.

The chief strategist of the Rhode Island Democratic Party is being slammed for her tasteless tweet about South Carolina Sen. Lindsey Graham, who had revealed that he contracted COVID-19 despite being vaccinated. "It's wrong to hope he dies from Covid right? Asking for a friend.

Panic Buying And Transport Lockdowns. In Wuhan, It Feels Like Early Pandemic Again

In a dramatic move reminiscent of the first days of the coronavirus in China some 19 months ago, flights and trains in and out of Wuhan have been halted amid a rise in COVID-19 cases linked to the highly infectious delta variant of the virus.

Britney Spears Says She Locked Herself in Bathroom

Britney Spears just told a long, bizarre story about getting locked in her bathroom in the middle of the night ... and it's eyebrow-raising for sure. The pop star just shared her wild bathroom adventure, explaining how she got trapped in there in the first place and detailing the lengths to which she and others went to set her free.

Kansas City's Chris Nilsen set a personal best on his way to a silver medal in the men's pole vault finals. Nilsen was one of two vaulters to clear a height of 5.97 meters.

OVERLAND PARK, KS - A first day could never have been better for many new teachers with the Shawnee Mission School District. Jordyn Burke is a first year kindergarten teacher at Corinth Elementary School. She said that despite nerves and the pandemic, she'll try to give students what they need.

Overnight lows will fall back into the low 60s and upper 50s for some. Southerly winds will take over Wednesday and it will hint a little warmer.

Tiësto - The Business is the song of the day and this is the OPEN THREAD for right now.