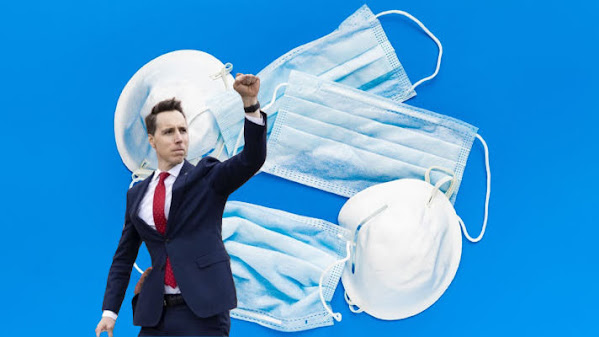 He has a bigger platform on Fox news but we notice that the Missouri Jr. Senator doesn't get a lot of love from the local media here in Kansas City.

And so . . . From both left & right perspectives we offer a quick round-up and a Missouri focused www.TonysKansasCity.com news collection . . .

Sen. Josh Hawley, R-Mo., is - to put it mildly - disliked. Yet in the early morning hours Wednesday, as the Senate debated a $3.5 trillion budget resolution, every U.S. senator but four voted for an amendment Hawley proposed that advocated putting 100,000 more police officers on the streets.

Senator Josh Hawley, who incited the rioters and Republican terrorists who attacked, gassed, and beat cops defending the Capitol on January 6, hoped he could make people forget his contempt for law enforcement when he called for the hiring of 100,000 new police officers yesterday. But Senator Dick Durbin wasn't having any of Hawley's garbage....

Missouri's U.S. senators took opposite sides on the trillion-dollar infrastructure package passed by the chamber Tuesday. Roy Blunt, the Show-Me State's senior senator, joined 18 other Republicans Tuesday in passing the $1.2 trillion proposal, which has been the subject of months-long negotiations between the GOP and Democratic leadership in the Senate and White House.