A monument dedicated to the founding days of Kansas City was hit by thieves earlier today.

The bronze statue of a Native-American woman is now missing and neighbors have alerted police and local media outlets.

Here's the message sent to www.TonysKansasCity.com . . .

"The middle bronze sculpture of the Francois Chouteau memorial has been stolen! This is on Chouteau Trafficway in the Northland."

Update from a lesser blog:

Heidi Markle, spokeswoman for the Kansas City Park and Recreation Department, confirmed in an email that the $80,000 statue recently went missing.

About the display from supporters . . .

Three, stunning, heroic-sized bronze sculptures—created by local sculptor Kwan Wu—tell the story of establishing trust and trade along the bluffs of the Missouri River.

Here's a peek at what the monument should look like . . . 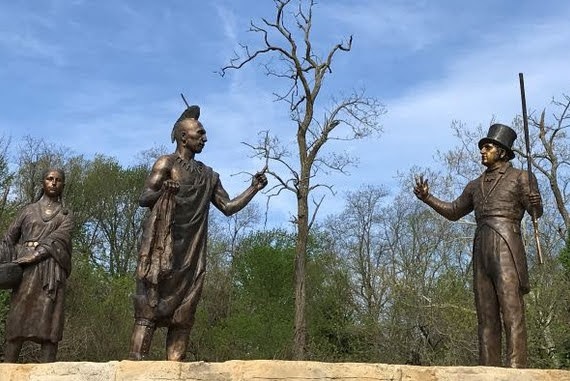 And here's what Northlanders woke up to this morning . . . 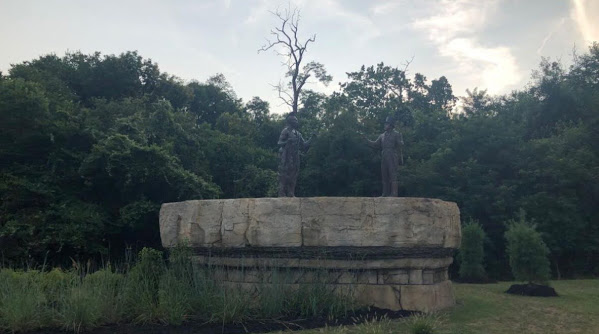 If crooks would have taken off with good old François we might suspect a political motive.

Thieves probably stole the Native American bronze lady statue because it was smaller and easier to carry.

KANSAS CITY, Mo. - The Kansas City, Missouri, Parks and Recreation Department is investigating the theft of a 400-pound, 7-foot tall statue. A community alert posted by the department said that sometime been Monday and Wednesday, someone stole a female statue at the François Chouteau and Native American Heritage Fountain.

This just in from the this is why we can't have nice things Department, over the weekend someone climbed atop the newly dedicated Missouri Bicentennial monument on Chouteau Trafficway just south of I-35 and stole a roughly 6-foot bronze statue of a Native American woman that was part of the larger exhibit celebrating Francois Chouteau establishing a trading post here in 1821.

KANSAS CITY, MO (KCTV) -- The authorities are investigating after a bronze statue was stolen from the Francois Chouteau & Native American Heritage Fountain. The fountain is along NE Chouteau Traffic, north of NE Parvin Road. The statue was stolen between Monday and Wednesday.


Someone stole a 7-foot-tall, 400-pound bronze statue from the Native American Heritage Fountain this week

The Kansas City, Missouri, Parks and Recreaction Department and police are asking for help to locate a very large, very heavy statue stolen from a park earlier this week. The statue of a Native American woman was stolen from the François Chouteau & Native American Heritage Fountain off Northeast Chouteau Trafficway, north of Northeast Parvin Road, at some point between Monday and Wednesday of this week.