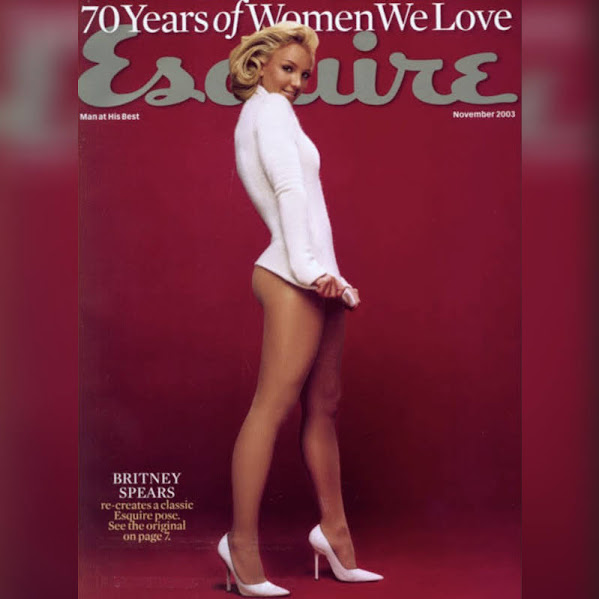 This evening we remember a classic turn from Britney where she displayed a bit of side-booty on magazine stands across the nation . . . And that old school happy thought inspires this peek at pop culture, community news and top headlines.

Take a peek at the www.TonysKansasCity.com news compilation . . .

'Pride Progress' themed crosswalks to be painted at 39th & Summit

KANSAS CITY, MO (KCTV) -- The city manager's office and the LGBTQ+ Commission in KCMO are teaming up to bring 'Pride Progress' themed crosswalks to the intersection of 39th and Summit. A release from the KCMO LGBTQ+ Commission notes that this intersection is essentially in front of Missie B's in Midtown KC, which is a historic LGBTQ+ establishment.

Police in Leawood, Kansas, said a Lenexa man was killed in a crash involving a motorcycle and a previously reported wreck.Leawood police said at 9:19 p.m. Wednesday, a single vehicle driving westbound on Interstate 435 just west of State Line Road lost control and stuck the center median, coming to rest in a westbound lane.

Emergency crews have recovered the body of a man who drowned at Longview Lake Thursday morning.The Missouri State Highway Patrol said that at 9:44 a.m., they were notified that a person had gone under.Authorities said two children were swimming near a pontoon boat when they began to drift away from it.

KANSAS CITY, Mo. - Kansas Gov. Laura Kelly announced Thursday that more than $6 million in grants will go to over 40 domestic violence and sexual assault programs and children's advocacy centers across Kansas. The grants are to help improve the programs' services for survivors of domestic violence, sexual assault and child abuse, according to a news release from the governor's office.

Missourians are now eligible to apply for Medicaid expansion

by: Chris Six Posted: / Updated: JEFFERSON CITY, Mo.- Missouri residents who believe they are eligible to apply for Medicaid are now able to on the Missouri Department of Social Services (DSS) website. The program is called MO HealthNet. "The necessary funding to cover the health care costs of the expanded population remains the issue.

MANHATTAN - Kansas residents unloaded frustrations with the GOP-led redistricting process on Monday as lawmakers launched a 14-stop, five-day blitz of town halls to gather public input into how political boundaries should be redrawn. Republicans characterized the online streaming of public forums as "unprecedented transparency," brushing aside complaints about the short advance notice of meetings [...]

Jamie Spears Agrees to Step Down as Britney's Conservator

Jamie Spears has agreed it's time to step down as conservator of Britney 's estate -- he just said so in new legal docs -- and he wants to work with the court on an orderly transition.

President Joe Biden departed the White House for a vacation in Wilmington, Delaware as multiple crises escalated Thursday, most notably the deteriorating security situation in Afghanistan that has forced the Pentagon to send troops to the country in a desperate attempt to help Americans there escape.

False claims of fraud in the 2020 election are fueling calls for violence on social media, the Department of Homeland Security is warning local police departments. "DHS has seen an increasing but modest level of individuals calling for violence in response to the unsubstantiated claims of fraud related to the 2020 election fraud and the alleged 'reinstatement' of former President Trump," a DHS spokesperson told NBC News.

US troops to help evacuate some embassy staff in Afghanistan

WASHINGTON (AP) - With security rapidly deteriorating in Afghanistan, the United States is evacuating some personnel from the U.S. Embassy in Kabul, and U.S. troops will be assisting at the Kabul airport, officials said Thursday. The decision to reduce staffing levels at the embassy was announced by State Department spokesman Ned Price.


Speaker Stands Up For Cali Guv

Pelosi rallies behind Newsom in California recall effort: 'We will defeat it'

House Speaker Nancy Pelosi Thursday said she's activated her political operation to help California Gov. Gavin Newsom stay in office and expressed confidence the recall effort against him will fail. Pelosi, D-Calif., said she's working at the grassroots level to turn out the vote in California ahead of the Sept.

It could've all been so simple, but the folks over at ABC just had to make it hard. Earlier this week, The Daily Beast reported that after an extended competition featuring possible guests such as Katie Couric, Aaron Rodgers, LeVar Burton and Robin Roberts, to name a few, Jeopardy!

Chicago reports Lollapalooza was not a superspreader event despite 400K attendees

SEOUL, Aug 12 (Reuters) - Former South Korean K-pop star known as Seungri was sentenced to three years in prison and fined nearly $1 million on Thursday after a court convicted him of crimes including procuring prostitutes for potential investors, local media reported.

A life-changing new procedure is being performed in Kansas City that will eliminate the need for open-heart surgery for a lot of patients.Saint Luke's Health System and Children's Mercy are among the first to use a newly approved heart valve that doctors call revolutionary."I knew it was coming for several years, I just didn't know what was going to happen," said David Persinger, 60.Persinger had open-heart surgery when he was just 5 years old to correct a common birth defect congenital heart disease.

Pavement repairs to shut down portion of downtown loop

According to a new report from the New York Post's Andrew Marchand, former Kansas City Chiefs quarterback Alex Smith has signed on with ESPN to be an NFL analyst this season. This doesn't mean that we'll hear Smith do color commentary on Chiefs games - at least not yet.

Watch: Meet the band of local contractors behind the development of Troost Village

"I think the great story about this entire development is that it is people from our community who are invested and working on it," said Jonathan O'Neil Cole. "They have personal connections to the site, and that's what makes this project so special."

Hide Transcript Show Transcript IN TRENTON. FOR THIS EVENING, WE WILL DROP THROUGH THE 80'S. HEAVIER RAIN IS A POSSIBILITY THROH UG10:00. BY MIDNIGHT, STORMS SHOULD EXI T.THIS WILL BE HEAVIER RNAI WE A MORE CONCERNED ABOUT IN THE GUSTY OR WINDS AADHE OF THAT.

Billboard #1 in 1971 "You've Got a Friend" is the song of the day and this is the OPEN THREAD for right now.