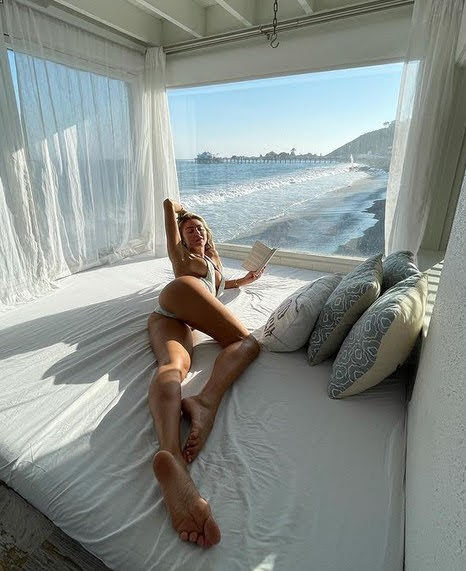 For those who know this blog, we always take a bit easier on Monday. Nevertheless, hottie Khloë and her social media winning has piqued our interest in pop culture, community news and top headlines.

Big Boy is coming back to Kansas City! Historic steam engine will be at Union Station starting Monday

A tour of 222 Waldo Flats: living life in the heart of downtown Waldo

It takes a woman developer to know how to properly design apartments with her fellow sisters in mind. Diane Botwin, owner of Botwin Development, demanded more bathroom and kitchen counterspace and deep walk-in closets at 222 Waldo Flats, her new five-story multi-use complex being built off 75th and Wornall.

KANSAS CITY, Mo. - A man is in custody after crash near Broadway Boulevard and 42nd Street left another man dead. KCPD are investigating after a white Nissan Maxima made a U-turn in front of northbound traffic on Broadway Boulevard causing a Piaggio Aprilia motorcycle to hit the back left side of the Nissan, ejecting the motorcyclist from their seat just before 6:30 p.m.

MONTEGO BAY, JAMAICA (KCTV) - A Kansas City native and his girlfriend are detained in Jamaica after a dream vacation and now his family is now questioning whether the COVID protocols there are in place to keep people safe or to make money.

The Senate is poised to pass a massive $1.2 trillion infrastructure bill that would upgrade state transportation networks, electric grids, water systems and more. It's a major spending boost and potential job-creator that yet falls short of the administration's goals to address climate change and reduce its effects in the states.

On Thursday, August 5, 2021, the fifth annual 'Babes in Toyland - Support Our Troops' charity event took place to benefit 'For the Troops' at one of the most historic entertainment venues in LA - the Avalon Hollywood in Hollywood, California.

Lawmakers and top climate officials in President Joe Biden's administration sounded the alarm on Monday in response to a new UN report.

U.S. facing another "dangerous" heat wave as 107 large wildfires rage across the West

More than 100 large wildfires are burning across nearly 2.3 million acres of the U.S. West, as forecasters warn Americans to brace for another extreme heat wave this week.Driving the news: "Widespread air quality alerts and scattered Red Flag Warnings stretch from the Northwest and Northern Rockies to the High Plains, as well as throughout parts of central California," the National Weather Service said Sunday.Get market news worthy of your time with Axios Markets.

Democrats release $3.5 trillion budget resolution, which doesn't include an increase to the debt limit

Senate Democrats released their budget resolution on Monday, which does not include an increase to the debt limit, kicking off a massive showdown on Capitol Hill and previewing the party's next steps following the expected passage of a bipartisan infrastructure bill.

The number of migrants crossing our southern border continues to break records, crime is surging and the COVID vaccination effort has stalled. So naturally, the White House spent the past week picking fights with Florida Gov. Ron DeSantis.

CBS News In a damning report released last week by New York State Attorney General Letitia James, New York Governor Andrew Cuomo is accused of sexually harassing 11 women. In an exclusive interview with "CBS This Morning" and the Times Union, one of those women, previously known only as Executive Assistant #1 is breaking her silence.

Off-year special elections always get more attention than they deserve. The recent Ohio congressional primaries are no exception, but their outcomes do provide clues to how national politics could proceed over the next three years. And, in that calculus, scored a big win, while former caught a small win and a significant loss - if by proxy.

The world is nowhere near the end of the pandemic, says famed epidemiologist Larry Brilliant

The pandemic is not coming to an end soon - given that only a small proportion of the world population has been vaccinated against Covid-19, a well-known epidemiologist told CNBC. Dr. Larry Brilliant, an epidemiologist who was part of the World Health Organization's team that helped eradicate smallpox, said the delta variant is "maybe the most contagious virus" ever.

The Taliban on Monday took control of another provincial capital in Afghanistan, an official said. The city's fall was the latest in a weekslong, relentless Taliban offensive as American and NATO forces finalize their pullout from the war-torn country.

Heather Graham, 51, enjoys her 'endless summer' on the beach

Heather Graham was on the beach Sunday. The actress shared a sizzling snap of herself wearing a black bikini under a matching crochet shawl. The 51-year-old was enjoying the season, captioning her shot: 'Hope everyone has an endless summer.' Adding to her summer attire, Heather rocked a stylish pair of sunglasses to block out the bright sun.

by: Juan Cisneros Posted: / Updated: ST. JOSEPH, Mo. - Hesston, Kansas native Katie Sowers has made headlines as the face of female coaches in the NFL after spending time with the San Francisco 49ers as an offensive assistant coach.

Ollama Isn't Just A Coffee Shop. It's A Legacy Of Mexican Culture On A Changing Southwest Boulevard

In a new coffee shop on Southwest Boulevard - between a cluster of Mexican restaurants to the west and the Crossroads to the east - Lesley Reyes serves café de olla the old-fashioned way. Café de olla is coffee steeped with cinnamon, star anise and piloncillo, a hard brown cone of refined cane sugar that melts down into syrupy sweetness.

KANSAS CITY, Mo. - Community members and local officials gathered at the home of Leroy Satchel Paige in the Santa Fe neighborhood of Kansas City, Missouri, Monday morning for a major announcement. However, the announcement turned out to be a surprise to even those who planned the event.

Eat This Now: baked goods at The Russell

The oatmeal cream pie at The Russell. // Photo by April Fleming The most difficult items to serve in a restaurant are the ones everyone can make (or the ones everyone thinks they can make). A humble cookie rarely makes it onto a dessert menu-even on kids' menus.

Hide Transcript Show Transcript MAKE IT EVEN MORE MORE HOTTER. YOU'DOT GTA THINK THAT ESPECIALLY WITH THE HEAT THAT WE HAVE THIS WEEK TODAY THROUGH THURSDAY. WHERE IN ANOTHER HEAT WAVE JUST THE FIR DAYST OF IT. WE'RE GETTING TEMPORARILY FROM THE MUGGINESS THIS MORNING. IT DOESN'T LAST LONG A LITTLE RAIN SHOWER.

Bruno Mars, Anderson .Paak, Silk Sonic - Skate is the song of the day and this is the OPEN THREAD for right now . . .