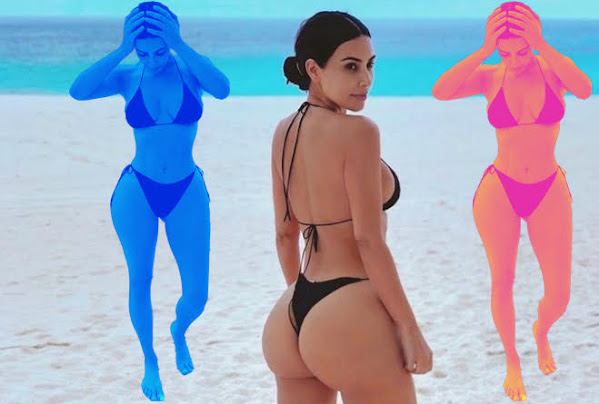 We officially start this news week with what might be the last peek at Kim K's old school booty as news of its deflation has rocked the internets.

Accordingly, we share pop culture, community news and top headlines in order to try and figure it all out.

Cowtown To The Rescue

Help is on the way from Kansas City

BATON ROUGE, La. - Hurricane Ida is the fifth strongest hurricane ever to hit the U.S. mainland. Several local organizations are already on the ground in Louisiana while others are on the way. The CEO and co-founder of Operation BBQ Relief said Ida making landfall Sunday was their call to action.

KC should require public employees to get vaccinated. Right now, about a third aren't

Businesses across the region are trying to decide if their employees should be required to get COVID-19 vaccinations. It's a critical decision: The delta variant continues to wreak havoc, causing unneeded sickness and death. The City of Kansas City should take a leadership role by requiring its employees to get COVID shots, with only a few narrow exceptions.

Rockets Hit Near Kabul Airport A Day Before The Deadline For The Exit Of U.S. Forces

As rockets apparently aimed at Kabul's airport rained down on a nearby neighborhood, U.S. forces scrambled to evacuate thousands of Afghan trying to flee ahead of a Tuesday deadline for the withdraw of all American troops. The attack, reportedly involving several rockets, occurred as U.S.

Veep Has Fewer Fans Than We Imagined

Vice President Kamala Harris' team canceled press access to her remarks to US troops at Pearl Harbor on Thursday - surely because it feared yet another disaster for the veep at the site of a terrible attack on America, the same day as the horrors in Kabul.

What will it take for the American majority to stop being hijacked by the bad-faith politics of an increasingly radicalized GOP that will stop at nothing to promote death and achieve minority rule? Most of us in this country, who have chosen life during a pandemic, are asked to coddle the unhinged temper tantrums and violent extremism of a conservative base that continues supporting the Jan.


Whilst The Getting Is Good

Dr. Anthony Fauci says he thinks it's a good idea amid the surge in coronavirus cases, due the highly contagious delta variant, to mandate COVID vaccinations for students to attend schools. "I believe that mandating vaccines for children to appear in school is a good idea," the chief medical adviser for the White House said Sunday in an interview on CNN's "State of the Union."


Lights Out In N'awlins

NEW ORLEANS, LA (KCTV) -- Hospitals there have been overwhelmed for over a month, and now the stress and pressure of health care workers are compacted by the natural disaster. One of the doctors on the front line there happens to be the younger brother of KCTV5 video editor, Callahan Creek.

Cori Smith outside her bookstore, BLK + BRWN. // Photo by AJ McIntosh (We Are Here Studios) It doesn't take a well-read historian to know the complex and ugly history of the Black community's relationship with America and the erasure of Black history.

Hide Transcript Show Transcript IMPACT ON THE DRIVE OF THE BUS STOP THIS MORNING 12 HOUR FORECAST FOR TAYOD HEREN I KANSAS CITY ABOUT 87 DEGREES THIS AFTERNOON MIGHT HAVE HEAT INDEX VALUES IN THE LOW 90S WITH MORE CLOUDS BUILDING THIS AFTERNOO INNTO THIS EVENING IS SCATTERED CLOUDS RIGHT NOW.

OneRepublic - Someday is the song of the day and this is the OPEN THREAD for right now.