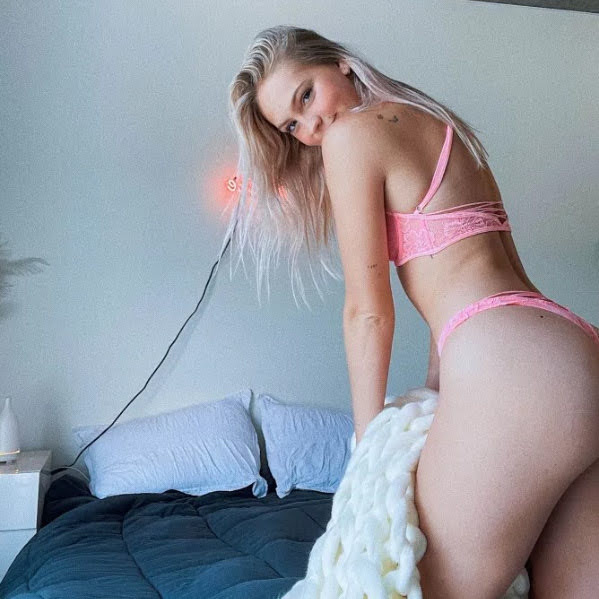 Social media sensation Jordyn Jones is more than just 21-year-old pretty face, she's also skilled entrepreneur with a vast array of branding deals that are cleverly weaved into the content she shares with MILLIONS of adoring fans.

For many, this has been the summer of the construction zone, especially on Kansas City, Missouri, roads.

KC man charged in connection with fatal shooting from 2019

JACKSON COUNTY, MO (KCTV) -- A Kansas City man has been charged in connection with a fatal shooting that happened in August of 2019. According to the Jackson County Prosecutor's Office, 27-year-old Douglas V. Griffin has been charged with second-degree murder and armed criminal action.

A federal judge rejected a proposed $1.75 million settlement to resolve claims by servers at Jose Pepper's that they were denied minimum wage and overtime, and were required to work before clocking in. U.S. Magistrate Judge Angel Mitchell, however, did agree to certify the case as a collective action under federal labor law.

The Delta variant is threatening the efficacy of the current COVID-19 vaccines. Now, health experts around the country are encouraging a booster shot for those who received the Pfizer or Moderna vaccine, hoping to get those efficacy levels back up.

With Homeland In Chaos, Afghans In Missouri Wait And Worry

The ongoing chaos in Afghanistan, where Taliban forces have retaken many cities following the rapid collapse of the U.S.-backed government, has some local Afghans worried about the safety of their loved ones overseas. The International Institute of St. Louis is preparing to potentially resettle more refugees from Afghanistan whom the Taliban may target for retribution because of their work supporting the U.S.

OVERLAND PARK, Kan. (AP) - A Democrat who has announced that he's stepping down from the Kansas House will serve as state policy director for a national group that defends the rights of atheists and fights to keep religion out of government. American Atheists on Monday announced the appointment of Democratic state Rep.

OMAHA, Neb. (AP) - Kansas City Southern will delay this week's planned shareholder vote on Canadian National's $33.6 billion offer to buy the railroad because regulators haven't ruled on a key part of the acquisition plan. The vote scheduled for Thursday was put on hold while investors wait to hear whether the U.S.


Police Work To Solve Old School Killing In The Dotte

by: Brian Dulle Posted: / Updated: KANSAS CITY, Kan. - The Kansas City, Kansas, Police Department is asking the public for help in trying to solve a 2016 homicide. Police say on Aug. 22, 2016, 38-year-old Joshua Allen Bush was found shot to death near 46th and Leavenworth Road by a city worker mowing.

The Kansas City Council's district boundaries will be redrawn. Here's what's at stake

The critical job of drawing new lines for Kansas City's six City Council districts will begin in earnest this week. Mayor Quinton Lucas is expected to name a seven-person committee to recommend new districts to the council, which starts the clock ticking.

The sheriff and a local school board in Johnson County have set COVID-19 policies conflicting with county rules on testing and masks. Johnson County is requiring unvaccinated employees to undergo weekly testing starting Monday, but the sheriff's department is exempt.

Arrowheadlines: The Chiefs are now over 95% vaccinated

KANSAS CITY, Mo. - A Kansas City, Missouri, man drowned on the Lake of Ozarks according to the Missouri State Highway Patrol. Early Tuesday morning, troopers responded near the 9.5 mile marker of the main channel on reports of a body floating in the water. James D.

One of the first people in the Kansas City metro area to receive a third dose of a COVID-19 vaccine after becoming eligible says she is feeling much better protected not only for herself but others.Megan Blake received her third dose of the Moderna vaccine at a Shawnee Walgreens on Sunday."They said I was only like the fourth person," she said.Blake has an autoimmune condition, so, her doctors told her she would become eligible to receive a third dose.

By Leila Kozma Aug. 9 2021, Published 5:43 p.m. ET Actress, singer, and podcast host Jordyn Jones took to Instagram on July 23, 2021, to announce that she'd split up with Jordan Beau after three years of dating. "Jordan Beau ... Thank you for being the brightest light in my life the past three years.

Pelosi spins news of US military equipment in Taliban hands: 'This is what happens when you withdraw'

Speaker Nancy Pelosi, D-Calif., was ripped for trying to spin reports of billions of dollars of U.S. military equipment now in the hands of the Taliban, arguing it's "what happens" when troops leave. "This is what happens when you withdraw," Pelosi said in an interview with KPIX 5 News Tuesday.

President Joe Biden is directing the Education Department to "use all available tools" to combat Republican governors whose state policies prohibit Covid-19 mitigation strategies like masking in the classroom.

U.S. officials plan to withhold federal funding from nursing homes that don't fully vaccinate their employees against Covid-19, a Biden administration official confirmed to NBC News on Wednesday. The new policy, which would withhold Medicare and Medicaid funding to nursing homes that don't comply, could take effect as early as next month, the official said, though the timing is fluid.

What We Know About The Situation In Haiti, 4 Days After The Massive Earthquake

The extent of the devastation in Haiti grows worse by the day. The death toll following the 7.2-magnitude earthquake that struck the southwestern part of the island on Saturday has climbed to 1,941 and nearly 10,000 people were injured, according to official counts on Tuesday.

A New York state prosecutor has charged a former close associate of Jared Kushner with cyberstalking less than a year after President Donald Trump gave him a federal pardon for related alleged offenses.

((( Johnson & Johnson's NYSE:JNJ) COVID-19 vaccine has had some challenges this year. From production issues to some disquieting reports of blood clots possibly being linked to the vaccine, it hasn't been the success the company was likely hoping it would be at this stage.


Diva Forgives 'Cry Me A River'

Spears referenced Timberlake in an Instagram caption for the first time since he extended an apology for his treatment of her following their 2002 breakup.

You'll have to check your own blood pressure reading this one. A Boston-area ICU nurse and 37-year-old mother of three was forced to leave work after employers discovered her skimpy side gig, an OnlyFans page with a current following of 69,000-plus, which is growing by the minute.

New ranking: How KC can break into the Top 10 Midwest startup cities (and why it hasn't yet)

A freshly released ranking of Midwest startup hubs shows Kansas City maintaining its years-long position at No. 12, but warns - despite a few recent headline-grabbing wins - the metro faces the threat of stagnation without increased activity, startup reinvestment and government support.

KANSAS CITY, Mo. - Bridget Egan is shaken up by her experience battling COVID-19. "Terrible and scary, frightening," Egan said. "I think it's concerning when you see concern on a doctor's face because they aren't exactly sure what your body went through or what you have."


The Dotte Shares Hand Up

A new food pantry will soon open in Wyandotte County

There's a new food pantry hoping to feed the hungry in Wyandotte County. It's set for a grand opening later this month. The food pantry's setup and operation methods are nontraditional. It's a grocery store that's free to those that need it."They get to pick exactly what they want," Cross Lines Community Outreach Representative Sufila Jones said.The Cross Lines Community Market works on a points system.


Back To School Tech Debuts

KANSAS CITY, Mo. - Kansas City Public Schools has launched a new online portal to help streamline communication between students, parents and teachers. The portal is called Infinite Campus. Essentially, it's a one-stop-shop for everything about a student, from attendance records, to grades, to upcoming assignments and behavior reports.

When a new coffee shop in KCK's Strawberry Hill neighborhood opens this fall, the space is expected to feature more than just specialty roasts - with financial literacy programming, community workouts and hip hop yoga sessions on the menu.


Don't Sleep On This Steady Job

Weekend road work: Crews to close I-70 in the northern portion of downtown loop

KANSAS CITY, Kan. - After winning the bronze medal in Tokyo, the United States women's national team will travel to Kansas City to take on South Korea at Children's Mercy Park on Oct. 21. "I'm so excited to have the U.S. Women's National Team in Kansas City," head coach Vlatko Andonovski said.

Travis Kelce Loses His Beard, The World Loses Their Mind - In Kansas City

According to the Twitterverse, Kansas City Chiefs tight end Travis Kelce did the unthinkable earlier this week. He shaved off his iconic beard. Yes, his face is nekkid. No mustache Monday for Travis Kelce. Said earlier "I forgot to put it on." #Chiefs pic.twitter.com/20lbvhrP9F - Harold R.

Dish & Drink KC: Two pop-ups to seek out this summer, plus a new Palestinian spot in the Eastside

The Vegan Bae from Devoured. Photo courtesy of Devoured. Get 'em if you can: Pizza from Devoured and baked goods from Little Butter Bakery Jhy Coulter and Kelsey Earl have a few things in common: both are local women have made names for themselves starting on Instagram and then quickly beyond with their home-based, from-scratch recipes.

Hide Transcript Show Transcript FOLLOWING THE GAME AS WE.LL WE'VE GOT YOU COVERED AND IT IS AN AWAY GAME, SEE YOU CANAT WCH IT FROM THE COMFORT OF YOUR COUCH IN THE AIR CONDITIONING. KATIE: THAT IS WHERE YOU WANTED TO BE YESTERDAY WHEN OUR THUNDERSTORMS FLARED UP OVER US.

Damon Albarn - Polaris is the song of the day and this is the OPEN THREAD for right now.