Kansas City Northeast community outcry and concern for public health confront city hall as a new homeless camp has been established at a toxic location. Tragically, the response from 12th & Oak has failed to show any urgency or interest in protecting this neighborhood or the trespassers currently occupying hazardous land.

An e-mail chain sent by AWESOME TKC TIPSTERS offers insight into the situation.

Here's the first note that reaches out to city planning and development . . .

I serve on the community council for Columbus Park. We've been watching with concern as people experiencing homelessness are camping on land by Independence and Paseo which used to have Chouteau Courts. I believe this entire area is a brownfield or most of it.

Groundwater is seeping up. I've seen photos of empty plastic water bottles by the water as if people may be drinking or bathing from it. I have notified the Housing Authority this is happening, and the photos I saw were taken by their head of security. I don't know the source of the water or how contaminated it may be.

What should we be doing to make sure people aren't being poisoned by being on this property?

The Columbus Park rep is right to be concerned.

The Housing Authority of Kansas City has an extensive record of environmental problems confronting this site.

City Hall documents confirm "the possibility of subsurface contamination" and the need for environmental cleanup near the area.

The messages continue . . . Due to limited space www.TonysKansasCity.com has shortened some of the replies but kept true to the "basics" of the message. In fairness, here's a somewhat hopeful response from city hall.

Thank you for letting me know of this situation.  I have copied Chase Johnson, the city’s project manager for the Choice Neighborhoods Initiative so that he is aware, as well as Amy Roberts, my colleague in the Health Department.

If you know, please identify the location where water is seeping at the surface.   We will see if it can be investigated.

I will also share this information with staff working on efforts to help the unhoused.

There are environmental reports on file that can be reviewed to see if there could be any public health concerns.  I’m not a health professional, but my recollection is that the contamination identified so far is fairly typical of what we find on other urban properties.  The brownfields program is about to begin another round of testing of the former housing site and the adjacent Belvidere Park.  The data from this next assessment will help us better understand the site conditions and plan a path forward for the safe use of the properties now and to prepare them for redevelopment.

Another plea from earlier this week . . .

"We're seeing more tents on the site near Independence and Paseo where Chouteau Courts was housed.

"The soil is contaminated and there may be people drinking or bathing in groundwater that's seeping up."

Tents at this site have DOUBLED over the past week and now the number of campers number around two dozen during more crowded occasions. As homeless outposts inundate Kansas City, this location has proven popular. 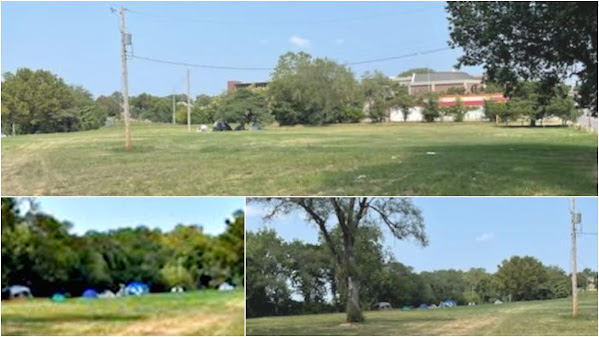 A tacit acknowledgement of the problem as complaints continue . . .

The water line leak has been investigated and our staff is working to resolve it.

The complaints moved up the 12th & Oak Chain . . . The City Manager finally responded.

We will only send case workers to perform outreach and kindly ask that they move as in the past.  Unless there is a clear and present danger for being there we will wait until we have new housing options in the next couple of months before attempting a more permanent relocation.

More than anything that response has shocked Northeast residents . . .

MONTHS!?!?! KANSAS CITY ALLOWS HOMELESS TO OCCUPY THIS TREACHEROUS PROPERTY AND ENDANGER THEIR HEALTH DESPITE DOCUMENTED EVIDENCE OF ENVIRONMENTAL RISK!!!

We're sharing this e-mail chain not only because it's part of the public record but also because it reveals that concern over Kansas City homeless camps is not vindictive or callous but hopes to protect the health of poverty stricken locals who are placing themselves in even greater danger.

Here's the word from an insider that sums up the situation perfectly . . .

"The dearth of leadership from the administration of Mayor Lucas on the homeless issue is something out of 'Alice In Wonderland' - Paradoxical and dangerously inept. The City manager's office is obviously following suit. The mayor is so out of touch with voters that it's nearly impossible to understand his constantly 'evolving' approach to public policy . . . His commitment to public safety has been suspect at best. What's worse is that communities are now forced to live with his decisions indefinitely and there has been no accountability or even concern about the consequences of his mandates for KCMO neighborhoods. For more than a year he has emboldened the homeless, rioters and every manner criminal on local streets along with so many others who pose an active threat to people in this community."

It's also worth noting that crime has spiked this location. Locals have reached out to the Prosecutor's office and the word back is that pursing cases against the homeless isn't a priority for the courthouse.

And so . . . The tents will likely continue to propagate as this community confronts increased crime & blight from new neighbors illegal camping at this toxic site. Meanwhile, inhabitants assume their own health risks while the city delays any immediate action to protect residents or the homeless.