An internal document reveals an exceptionally tense situation inside city hall during a vote on the Kansas City COVID mask mandate.

The e-mail was sent our way by a reliable source and confirmed by city staffers. Remember that most if not all of internal city hall communication is open to the public via Sunshine Request . . . This conversation on security issues is part of the public domain.

We've omitted the name of the sender because we haven't been able to get a comment explaining the remarks in greater detail . . . But TKC believes the words speak for themselves.

"Show them what real protesters can do." Seems like a cryptic comment . . . We're not being overly sensitive but the language is terse and not very welcoming of people wanting to attend a public meeting. 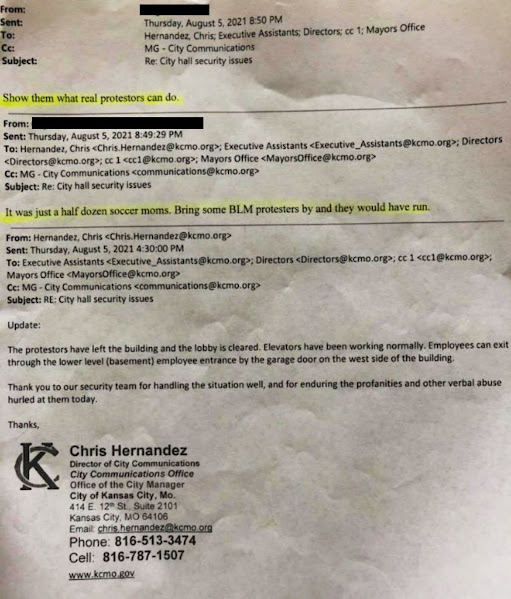 An estimation of the protesters is also a bit politically incorrect . . .

"It was just half a dozen soccer moms. Bring some BLM protesters by and they would have run."

This juxtaposition is interesting and reveals the cultural divide inside 12th & Oak that pits KCMO residents against each other.

Tempers run hot when discussing city hall policy but we would hope that every denizen of the discourse would keep calm and behave decently in a public meeting. This behind the scenes communication suggests otherwise.

So what does all this tell us here at www.TonysKansasCity.com???

The COVID crisis is becoming more volatile in Kansas City and, amid a dearth of leadership, it seems that the conversation has sparked an escalating level of local derision and divisiveness with little hope of resolution.