Afghanistan Fall According To Jason Kander 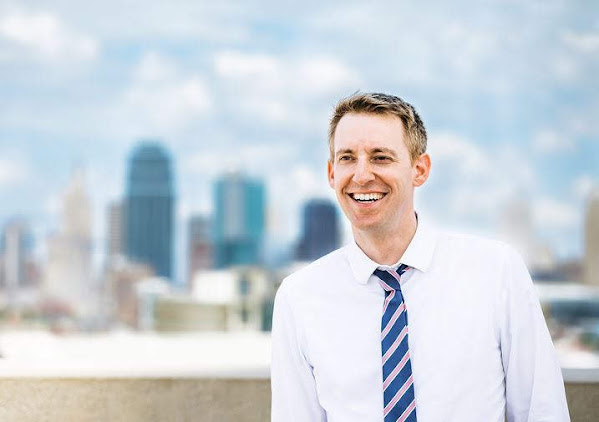 Over the past 24 hours one of Kansas City's political stars has been dominating national news coverage in the aftermath of a historic U.S. diplomacy FAIL.

Full disclosure: This blog respects Mr. Kander or, at the very least, we trust his insights more than aggrieved keyboard warriors.

UPDATE: An important distinction we've noticed is that Mr. Kander seems to reject Prez Biden's contention about the Afgan military and is one of the few progressives that isn't attempting to politicize the American-made crisis.

And so we offer this quick collection of local highlights after a prime time 'Don Lemon Tonight' appearance served as an indication that this former politico still garners a great deal of the MSM spotlight.

Check the www.TonysKansasCity.com news links that start with Mr. Kander's media tour and then continue with more local coverage and then a few national news links we've been reading . . .

Jason Kander: 'Check on soldiers and veterans' in wake of Afghanistan developments

Kansas City veteran and former Missouri Secretary of State Jason Kander says the images coming out of Afghanistan right now are especially tough for people who served in that country. Kander joined the army and was deployed to Afghanistan after 9/11. He served as a military intelligence officer there.


Jason Kander on the situation in Afghanistan

Former Secretary of State Jason Kander said in an interview today that the ending in Afghanistan likely won't leave many veterans with the closure they've been seeking.

The reactions of Americans to the conclusion of the 20-year conflict in Afghanistan include shock and outrage. But for some military veterans and contractors who were stationed in the country, there is also worry for the Afghans who worked with them. Three of these men offer their thoughts on the withdrawal of U.S.

LANSING, KS (KCTV) -- As the chaos continues and concerns intensify in Afghanistan, one Lansing veteran is trying to draw attention to a group in Kabul, now stranded and scared, who gave western soldiers hope to people like him when they returned home. Thad Krasnesky (Maj., Ret.)

KANSAS CITY, Mo. - The events in Afghanistan are difficult to watch for the men and women who served in the military over the last 20 years. Scott Weaver is the current president of the local chapter of the Association for the United States Army.

The images of the chaos unfolding in Afghanistan has been hard for some Kansas Citians who have seen this happen before.There are about 14,000 Vietnamese-Americans in the Kansas City region. Like everybody else, they're watching the events in Afghanistan."When I see the pictures, it touched my heart.

WASHINGTON - U.S. Senator Dr. Roger Marshall (R-Kan.) announced Tuesday that he has launched an email address for Kansans seeking evacuation help from Afghanistan. Marshall's office said it is in close contact with the U.S. Department of State and working to help Kansans with evacuation assistance.

Factions within the Biden administration are embroiled in a blame game over why the US government didn't act sooner to withdraw American citizens and Afghans who helped the US over two decades of war, leading to a rushed and dangerous evacuation.


VA resources for veterans troubled by news from Afghanistan

KANSAS CITY, Mo. - A lot of disturbing news is coming out of Afghanistan as U.S. troops leave the country and with the Taliban retaking control of the country's capital, Kabul, and its government.

President Biden is facing a huge backlash for not taking any questions about the ongoing turmoil in Afghanistan following his coronavirus address to reporters. As the world is watching the panicked withdrawal of Americans from the Taliban-controlled country, Biden focused his remarks on promoting the booster shot for COVID vaccines and mask mandates for children at schools while scolding Republican governors who oppose his agenda.

The US President, in an interview with ABC News' George Stephanopoulos, said: "The idea that somehow, there's a way to have gotten out without chaos ensuing, I don't know how that happens." Mr Stephanopoulos then asked President Biden: "So for you, that was always priced into the decision?"

The swift fall of Afghanistan to Taliban fighters two decades after the United States invaded the country has triggered a political and humanitarian crisis. It's also causing security experts to wonder: What's going to happen to the country's vast untapped mineral wealth?

The unfolding disaster in Afghanistan has put a spotlight on the intelligence community's role in the largest foreign policy crisis of Joe Biden's presidency. "There was nothing that I or anyone else saw that indicated a collapse of this army and this government in 11 days," Milley told reporters during a Pentagon briefing.

Secretary of Defense Lloyd Austin and Joint Chiefs of Staff Chairman Gen. Mark Milley provided an update of the evacuation of American citizens and pledged to successfully evacuate all American citizens attempting to flee the war-torn region. "Right now there are troops at-risk.

WASHINGTON - The Pentagon on Wednesday acknowledged that it does not currently have the capability to safely escort Americans in Kabul to the airport for evacuation as the Taliban consolidate control in Afghanistan's capital.

Capitol Hill hearings will focus on Afghanistan withdrawal Congress is quickly launching investigations into how the Taliban so easily took over the government in Afghanistan. Rep. Gregory W. Meeks, chairman of the House Foreign Affairs Committee, has asked Secretary of State Antony Blinken and Secretary of Defense Lloyd Austin to testify on the situation.