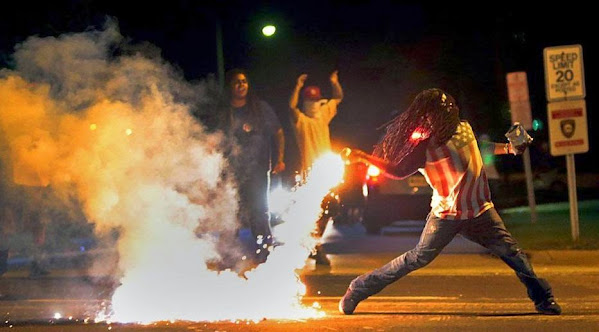 The Ferguson effect is a hypothesized increase in violent crime rates in a community caused by reduced proactive policing due to the community's distrust and hostility towards police.

The Ferguson effect was first proposed after police saw an increase in violence following the 2014 shooting of Michael Brown in Ferguson, Missouri. The term was coined by Doyle Sam Dotson III, the chief of the St. Louis police, to account for an increased murder rate in some U.S. cities following the Ferguson unrest. Whether the Ferguson effect really exists is subject of discussions with many published studies reporting contradicting findings concerning whether there is a change in crime rates, number of 911 calls, homicides, and proactive policing. Furthermore, the effect and influence of the portrayal of police brutality in the media is also contested.

IS THE FERGUSON EFFECT FOR REALZ?!?

We should note that quite a few police object to this terminology and analysis of recent crime data.

Nevertheless, no matter how readers answer the question . . . There's no denying the continued legacy of the Show-Me State flash point.

FERGUSON, Mo. (KMOV.com) -- Today marks seven years since Michael Brown was killed by a police officer in Ferguson. His death not only changed the St. Louis region but brought global attention to police brutality and racial inequality in the United States.

FERGUSON - When Eric Osterberg takes the reins this month as city manager, he will be the eighth person to step into that role since 2014. The city also hired its fourth police chief in July. As Ferguson marks the seventh anniversary of the Aug.