Remember that about a year ago rioters on the Country Club Plaza torched a KSHB news truck during "mostly peaceful" protest against police brutality.

That must've stung given the newfound progressive leaning of the Kansas City station that was preceded by a bevy of lawsuits and white ladies, reportedly, crying.

The heat from part-time protesters in between their shifts as baristas or proud hipster taco stand workers is no match for right-wing roasting courtesy of Tucker Carlson.

TUCKER CARLSON IS THE VOICE OF AMERICAN CONSERVATISM RIGHT NOW AND HE'S ON RECORD CALLING OUT A KANSAS CITY NEWS OUTLET FOR ALLEGEDLY LYING ABOUT COVID DATA!!!

Here's the passage from the controversial Fox News talker . . .

"Journalists are doing everything they can to convince you that emergency measures are necessary -- civil rights should be suspended, in the case of COVID. They're even lying to make that point. In Kansas City, for example, NBC affiliate KSHB posted a disturbing report this week.

"Children's Mercy Hospital is operating to capacity, not only because of COVID-19 cases among youths who aren't eligible to be vaccinated, but also due to ending mask policies." That was a report.

"Oh, wow, really? When you get rid of mask policies and you don’t make 3-year-olds get the vaccine, your hospitals fill up and millions die. The ICUs are flooded again -- all because of children and people who aren't wearing their masks because they believe in QAnon or they’re racist. That’s what they’re telling you. And not just in Kansas City, everywhere. But is it true? In this case, it’s not. Children's Mercy Hospital said it had no idea what the local news media was talking about.

"We continue to be able to meet the needs of our patients requiring hospitalization," Children's Mercy wrote in a statement. "The increase in children we are treating as in-patients is mainly due to respiratory illnesses" -- ones that are unrelated to COVID.

"In other words, no, in Kansas City, the hospitals are not flooded with QAnon believers who refuse to wear their masks. They lied about that. Why would they be lying about that? What is all of this about? At the very moment we discovered they had been telling us something that was not true about the CDC, they redouble their efforts to make you believe what all of us know is false. "

Read the article wherein the conservative heir to a TV dinner fortune makes his case . . .

Fox News: Tucker Carlson - Democrats and the CDC have been lying about COVID and the vaccine

Special thanks to BAD-ASS TKC READERS who shared screen caps with our community here at www.TonysKansasCity.com . . . 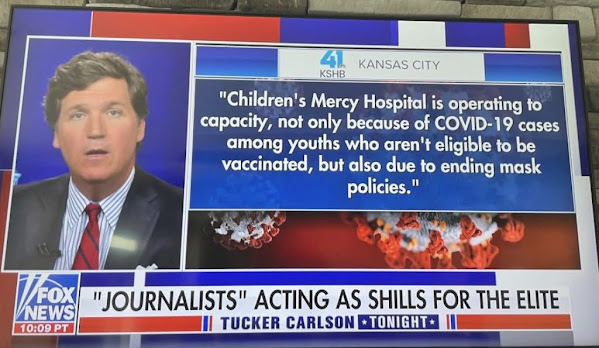 Here's the response from the hospital . . . We expect that their PR team might release another statement sometime soon when local newsies call them on it, in turn. 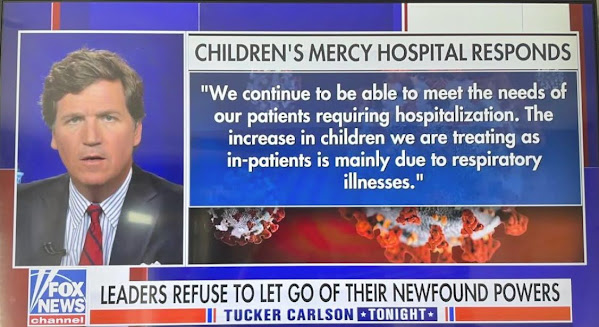 For the record, TKC isn’t calling anybody a liar and we’re simply sharing this exchange because it has been conveniently neglected by our mainstream local media.

And so readers can make up their own mind . . .

Watch the Kansas City segment on NATIONAL CABLE NEWS that deserves a closer look for further discussion and to help locals try and figure out who they should trust about the worsening plague.

If anybody has the answers, please lemme know . . . But if it's coming from the Internets or TV . . . I'll probably still be pretty skeptical and hiding out in my (mom's) basement just to be safe either way this turns out.