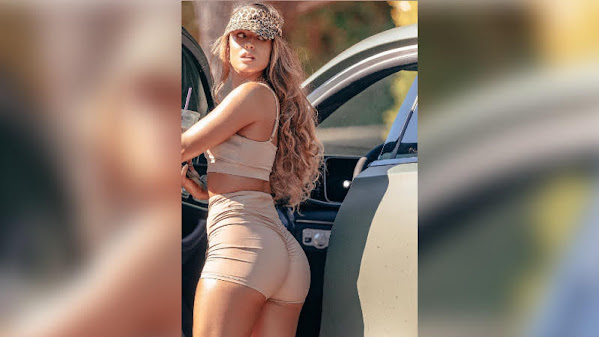 It's no secret that OUR KICK-ASS TKC BLOG COMMUNITY is running just a bit behind BUT we're working hard to sort through some of the more important topics whilst still staying current. TO THAT END . . . We're inspired by hottie Sommer and her ample talent and handling all of life's curves whilst we check pop culture, community news and top headlines.

KANSAS CITY, Mo. - Big changes are coming to Kansas City's West Bottoms and Kansas City, Kansas' Armourdale neighborhood. A bridge between the two is becoming quite the attraction. In about a year-and-a-half, developers say the Rock Island Bridge will no longer be in a dark and empty part of town, but will instead have music, good food and a lot of adventure.

Is Kansas City the next Springfield? Hospitals address concern over COVID-19 surge

KANSAS CITY, Mo. - As the delta variant of the COVID-19 virus ravages the state of Missouri, some are concerned hospitals won't be ready for the influx of patients. Springfield has recently become known as the epicenter of the virus, with cases rapidly increasing and the vaccination rate remaining low.

Who Are All Of Sommer Ray's Ex-Boyfriends?

Sommer Ray was born in 1996. The 24-year old Instagram sensation and fitness influencer was home-schooled for the better part of her childhood. Coming from a family of fitness enthusiasts, it only seemed natural that she would follow the same career path her parents did.

The Federal Reserve on Wednesday held its benchmark interest rate near zero and said the economy continues to progress despite concerns over the pandemic spread. As expected, the Federal Open Market Committee concluded its two-day meeting by keeping interest rates in a target range near zero.

'Such a moron': Pelosi heaps disdain on McCarthy for criticizing mask guidance

The House speaker, Nancy Pelosi, on Wednesday heaped disdain on the Republican minority leader's criticism of Congress's new mask requirement - a reversal of policy that reflected growing number of cases and fears about the highly-transmissible Covid-19 Delta variant at the Capitol.

subscribe to The NPR Politics Podcast podcast Bipartisan Senate negotiators say they have reached a deal on an infrastructure package and a procedural vote on the measure is expected to take place Wednesday evening. Ohio GOP Sen. Rob Portman told reporters the group reached agreement on the major issues and were still working on legislative text.


In Defense Of A Mental Health Day

Fox News host Dagen McDowell pushed back on Wednesday against Republican Senate candidate J.D. Vance's assertion that superstar gymnast Simone Biles' withdrawal from Olympic events over mental-health concerns shouldn't be seen as heroic, declaring that Biles "deserves praise up and down all day long until the end of time."

ZZ Top bassist Dusty Hill, who played with the Texas blues rock trio for over 50 years, has died at age 72. "We are saddened by the news today that our compadre, Dusty Hill, has passed away in his sleep at home in Houston, Texas," surviving members Billy Gibbons and Frank Beard said in a statement.

ST. JOSEPH, Mo. - After last year's closed practices due to COVID-19, season ticket holders joined the fun at the Kansas City Chiefs training camp once again Wednesday. Camp will be open to the general public on Thursday, but things will look different than years past.

The world would be a better place if Big Tech employed more women and non-binary folks, and LaunchCode wants to help them acquire a share of the thousands of high-wage jobs that sit unfilled in the wake of the pandemic.

WHEN YOU GO. JUST HAVE FUN, BUT BE SAFE. NI:CKND A THAT IS THE BIG THING, HYDRATING IF YOU ARE OUTSIDE. FROM HER SEVERAL HOURS. ESPECIALLY TODAY AND TOMORROW. THEY COME SOMETIMEST I IS A CREEPING TOLD THAT IT TAKES. YOU DO NOT NOTICE IT UNTIL IT IS TOO LATE.

Seether - Wasteland is the song of the day and this is the OPEN THREAD for right now.