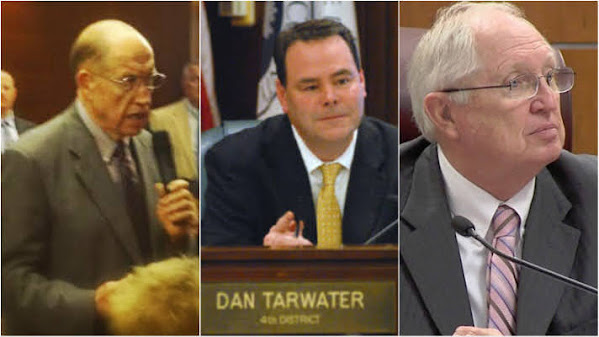 For Friday afternoon we share delightful rumors and a preview of election chatter for people who really know the players in and around Kansas City proper.

Some of his critics will deny this and Mr. Sharp will likely claim it's all speculation right up until the point where he gets in the contest . . . BUT, a low-key run for the Courthouse would be a convenient way to pad his retirement and much more exciting than writing for a community newspaper.

Other names that have circulated in this contest are former MO House candidate Laura Loyacono and more interestingly . . .

Geoff Gerling - Executive Director at Jackson County Democratic Committee - Who will be a shoo-in when he is finally able to make the formal announcement.

COURTHOUSE INSIDERS CLAIM DAN TARWATER IS MOVING HIS GAME TO KCMO CITY COUNCIL AND WILL FORGO A CHALLENGE AGAINST FRANK WHITE!!!

This will disappoint quite a few tax fighters but it's a smart move . . . Again, Legislator Tarwater has excellent name recognition and a solid reputation. Cashing in 4 to 8 years at 75K (for a part-time job) by taking over the 6th District KCMO seat left vacant by Scott McManus will serve him far better than a racially charged fight with the incumbent who is still a big enough name to draw fundraising from across the region.

Sure, he has his detractors but his work to push forward an animal shelter over the course of a decade might make up for that . . . A campaign mailer with puppies is probably all that it would take to convince most local, low-info voters. Even more interestingly, word of this old school challenge to Jalen Anderson is a testament to the community connections of former Legislator Waits.

Fact is . . . Mr. Waits has a great deal of community support that falls along generational and not racial lines.

It might not come across in this post but TKC and voters from across the metro have a great deal of affinity for these old codgers and their RUMORED return speaks to a level of frustration with the NEXTGEN crop of local political contenders.