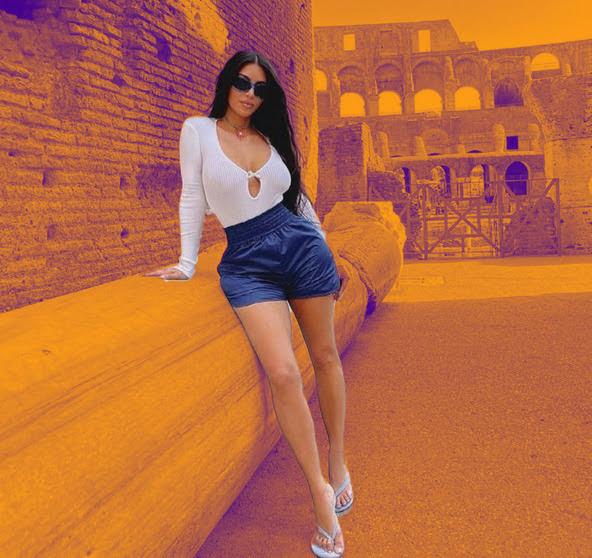 We've got a lot to cover tonight and right now hottie Kimmy living the good life after 40 inspires us to put a bit more effort into checking some of the most important items from pop culture, community news and top headlines . . .

KANSAS CITY, Mo. - The arrival of the U.S. Navy's Blue Angels at an airport looks just a little bit different than the normal commercial airplane. The Blue Angels arrived Thursday morning at New Century AirCenter in Gardner, Kansas, ahead of this weekend's Kansas City Air Show.

By Corbin Smith, Editorial Assistant United States Representative Emanuel Cleaver II announced that the INVEST in America Act being considered by the House Committee on Transportation and Infrastructure includes more than $22.6 million for infrastructure projects throughout the Fifth Congressional District of Missouri.

American Century Investments has agreed to pay current and former employees $1.5 million as part of an agreement with the U.S. Justice Department's Antitrust Division to settle charges that it conspired with another firm not to compete for employees.

Kansas City may begin inspecting the structural integrity of city-owned and city-leased buildings in response to the abrupt collapse of a condominium building in Florida last week. Currently Kansas City only requires periodic inspections of parking garages, underground caves and broadcast transmission towers.

KANSAS CITY, Mo. - A father of two is dead after a crash on I-435 Wednesday morning. Family members said the man who was hit was 50-year-old Derrick Holloman. Kansas City Police said the search for driver who hit him continues. "It was a shock because we didn't know that that had happened," Camryn Holloman, the victim's daughter said.

KANSAS CITY, Mo. - Ridership has been declining for quite some time on the bus system in Kansas City, so KCATA is making changes to ensure their coverage is still relevant. Beginning Sunday, Oct. 3, current routes will change in some way, along with the connecting routes.

Kim Kardashian is making a number of sartorial statements during her Roman holiday. The reality TV star, 40, stepped out in a white custom Fendi minidress on Wednesday night while posing on the Spanish Steps in Italy. Kardashian wore her hair in a high ponytail and only accessorized her look with wrap-around-the-calf heeled sandals.

The United States has won international backing for its plan to overhaul the global system for taxing companies, a huge step toward simplifying a complex web of rules long exploited by big corporations.

The indictment of the Trump Organization and its CFO Allen Weisselberg, explained

NEW YORK (AP) - A California woman who wrongly accused a Black teen of taking her phone at a New York City hotel late last year and grabbed at him as he tried to leave is now charged with a hate crime.

JUST IN: Pelosi Announces Liz Cheney to Sit on 1/6 Committee, Despite Threats of Revenge From McCarthy

Chinese President Xi Jinping warned that any country that attempts to "bully" China will "face broken heads and bloodshed" during a defiant speech Thursday marking the 100th anniversary of the Communist Party.

A cycling fan who caused a huge pileup on the opening day of the Tour de France on Saturday handed herself in to police in Brittany this week, but was to likely avoid prosecution as the Tour organizers decided not to press charges.

Britney Spears's lawyer asked the judge in her conservatorship case to boot him as the conservator of her estate, but a judge just shot that down and says Jamie stays -- at least for now. Britney's lawyer, Sam Ingham, actually asked the court to suspend Jamie from conservatorship duties back in November and the judge denied the request back then.

photo by Jez Timms In celebration of National Grilling Month, Crystal Farms Dairy Co. announced a list of the top 10 midwestern cities that consume the most cheese. Science says that Kansas City ranks fourth. We even placed above Milwaukee, Wisconsin, which placed seventh. Weren't they supposed to be the cheese capital of the United States?

Health experts say the best chance at combating COVID-19 hotspots is getting people vaccinated. With many people in the metro still on the fence, some community organizations are doing their part by encouraging Kansas Citians at free vaccination sites with incentives.


Even Losers Need Gift Of Life

by: Heidi Schmidt Posted: / Updated: KANSAS CITY, Mo. - The Kansas City Royals are offering fans a simple way to get free tickets to future games at Kauffman Stadium. Simply make an appointment and donate blood at the Community Blood Center.

BLUE SPRINGS, MO (KCTV) -- A fisherman in Blue Spring recently snagged a nine-pound butterfly koi goldfish. The Missouri Department of Conservation says Tim Owings was fishing at Lake Remembrance over the weekend when he caught the once pet. "When pet owners dump ornamental fish like this, it can cause serious issues for native species," the department said.


Living In The Past

EXCELSIOR SPRINGS, Mo. - Heavy rain and flooding could have played a part in another building's partial collapse in the metro. Tuesday, crews demolished a Kansas City building at 39 th and Woodland that had partially collapsed earlier in the day. Wednesday, part of an historic downtown Excelsior Springs hotel collapsed forcing evacuations of nearby apartments and businesses.


Erin Warns That Weekend Warms Up

Cloudy skies, mist, drizzle, and low visibility to begin your Thursday. Roadways will be wet and slow going for the morning drive. We are tracking a 20% for rain today with a high of 83 this afternoon. The sunshine is back tomorrow along with highs in the middle 80s.

Billboard #1 in 1971 Carole King - It's Too Late (BBC In Concert) is the song of the day and this is the OPEN THREAD for right now.