Kris Kobach On Death Of DACA: Justice Is Done 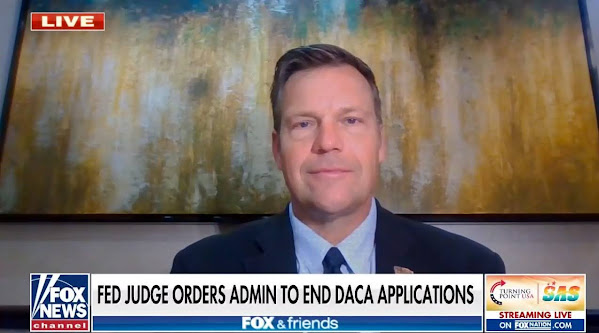 Picking up this worthwhile interview from the weekend given its political implications in an upcoming election . . .

Kris Kobach appeared on Fox and Friends to discuss a federal judge's ruling against the DACA (Deferred Action for Childhood Arrivals) program.

Kris Kobach represented ten ICE agents in the first lawsuit against DACA in 2012.

"We -- attorneys general, ICE agents, myself -- have been pointing this out to judges for years as we challenged DACA in courts," said Kobach. "I think this ruling will be upheld in the Fifth Circuit and in front of the Supreme Court."

DACA is a program created under the Obama administration that in practice has created amnesty for over 850,000 illegal aliens who are competing with United States citizens for jobs.

"The notion DACA is for children is a myth," said Kobach. "You can be up to 45 years old and simply have to claim you've been in the country prior to the age of fifteen. We are a country of laws, and in a country of laws you must come in legally."