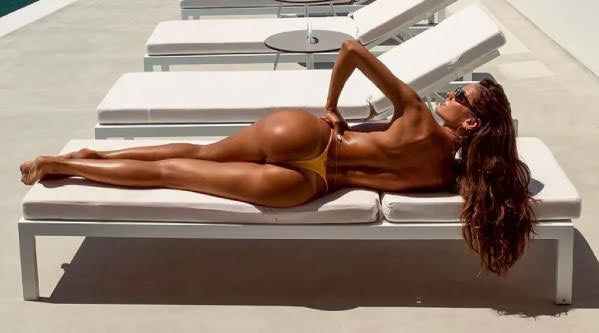 Sorry for the silly post title but a brazen and cheeky bit of promotional content from hottie Izabel brings out our playful side as we check community news, pop culture and top headlines.

Kansas City Takes Off Despite COVID

KANSAS CITY, Mo. - The Kansas City International Airport said 803,589 passengers traveled through the airport in June. According to the Kansas City, Missouri, Aviation Department, that was a 233.9% jump compared to June of 2020. The department also said overall year-to-date travel is also up by 23.1% compared to last year.

KANSAS CITY, MO (KCTV) --- The Kansas City Police Department is hoping you could identify a person of interest in a homicide investigation. Police say the homicide happened June 8 in the 3500 block of Independence Avenue. A man was shot and killed in the area on that day.

Aerial views of a Grain Valley, Missouri, property show law enforcement vehicles and FBI agents surrounding a new dig site at a home with an outbuilding in the 4000 block of Buckner Tarsney Road in unincorporated Grain Valley.This is the location where Independence police said they located the remains of Kensie Renee Aubry, who was reported missing in October 2020.The FBI confirmed they are on the location in support of an "ongoing local law enforcement matter."

MODEL Izabel Goulart is a ray of sunshine in the heatwave. The Brazilian born star posed in a racy, low cut one-piece to mark her arrival on holiday in Greece. Izabel, 36, shared the snap on Instagram and said: "Touchdown Mykonos."So happy to be back to my favorite island."

But there are far bigger stakes for the White House. Biden, a self-described party guy, is keen on avoiding the down-ballot carnage that took place under presidents Trump and Barack Obama before him. And so, as Biden's aides and allies put it, he's tending to the store early.

President Biden addressed the public during a town hall with CNN Wednesday, which " Hannity" host Sean Hannity considered an "unmitigated disaster." "Many of Joe's answers were completely incomprehensible," he said. "At times no one seemed to know what the hell Joe was even talking about.

'Deadly serious': Pelosi goes to war with GOP over Jan. 6

"They wanted to kill her. They were hunting her," Rep. Karen Bass (D-Calif.) said. "I don't think this is a political calculation at all. You're talking about the greatest assault on our democracy in over 100 years." Pelosi huddled with the panel's seven Democrats and sole GOP member, Rep.

WASHINGTON, July 23 (Reuters) - The participant in the Jan. 6 U.S. Capitol riots nicknamed the "QAnon Shaman" is negotiating a possible plea deal with prosecutors, after prison psychologists found he suffers from a variety of mental illnesses, his attorney said.

Does this count as Instagram official? Ben Affleck and Jennifer Lopez had their hands all over each other at a recent soirée-and the photographic evidence is hidden in plain sight. Sorry to say, the glitzy event wasn't their wedding, but Bennifer fans can still relish the first Instagram pic of the couple that has come from their inner circle.

Wyandotte Co. to give away 10 pop-up spray parks to community groups to beat the heat

Officials in Wyandotte County are using a mini-grant to help people stay cool as we enter the hottest stretch of weather so far this year.The Unified Government of Wyandotte County and Kansas City, Kansas, is offering up 10 pop-up kits to community organizations in the area to host their own fun events.Each kit includes sprinklers, slip-and-slides, garden hoses, snacks and water for approximately 30 participants.

After a 30-year run at Independence and Chestnut Avenue, Boulevard Pastries will bake its last doughnut and fry its last pie on August 14, 2021. According to partner Mary Clark, it's time to hang up the apron. Boulevard Pastries was launched in 1992 by Clark and business partner Loretta Peeler.


Be Careful In Today’s Heat

An Excessive Heat Watch will go into effect at 1:00PM Friday bringing dangerously hot weather after high humidity levels have been added to high temperatures. In the meantime, expect a warm and sticky evening while a steady south wind cruises across our area at less than 8 MPH adding the high humidity levels which will keep temperatures in the 80s until nearly midnight.

Justin Bieber - Peaches ft. Daniel Caesar, Giveon is the song of the day and this is the OPEN THREAD for right now.