In a debate over police local control, the newspaper hopes to rewrite local history.

First, we share the basics and a more accurate version of the past that even most local progressives agree upon . . .

When the Kansas City Police Department was formed in 1874, the governor was put in charge of board appointments. That changed in 1932 when Tom Pendergast helped bring local control to the city. The political boss essentially controlled the police department out of his office on Main Street, keeping officers’ wages low so they’d be willing to accept bribes.

The change was shortlived. Seven years later, the power to appoint board members was handed back to the governor so the board wouldn’t be subject to the political whims of whoever was in power in Kansas City. The new board cleaned house, appointing a new police chief who fired roughly 50% of his employees in an effort to root out corruption, according to KCPD.

Here's a peek at the Kansas City Star attempting to rewrite the iconic history of this town in order advance a narrative that focuses on systemic racism . . . 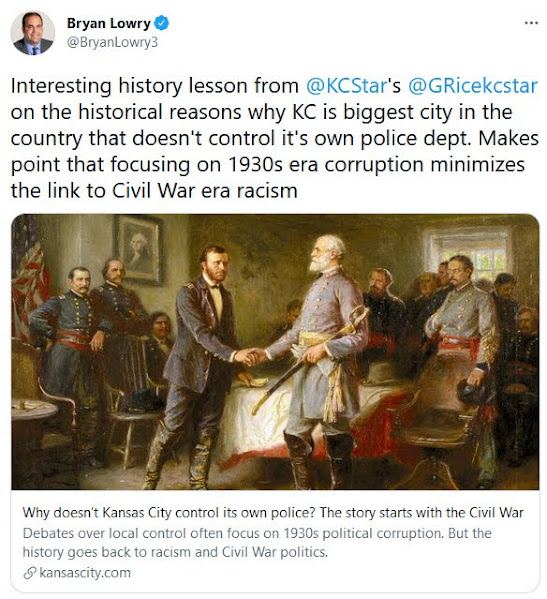 The only bright spot is that, LITERALLY, NOBODY IS BUYING IT as the fortunes, subscriber base and advertising revenue of the newspaper continue to decline whilst dead-tree media condemns itself to silly social media culture war slap fighting.