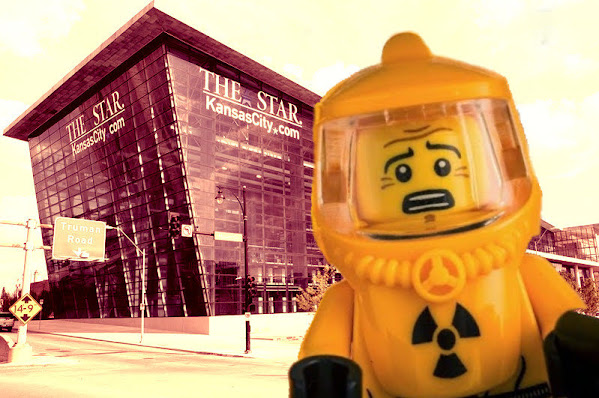 A recent debate over the written word and public education is meaningless for most Kansas City metro residents but there's a chance that the two dozen people who really care might also check this blog.

Congratulations to the Kansas City Star for revealing that the newspaper, obviously, still thinks it's 1996 and everybody is using a 56K dial-up modem.

An argument over printing a potentially controversial column from a political candidate is nothing more than a pathetic comedy of manners.

In this situation we also chide the Kansas Republican nobody because he allowed himself to be taken to the rhetorical woodshed over a bit of blather that would have reached more people and had a greater impact as a social media meme or sponsored Facebook post.

Nevertheless, here's "reader relations" dude Derek Donovan greatly overestimating the power of the newspaper and attempting to pose as an arbiter of truth after technology has made this conversation irrelevant . . .

"I’m happy to publish Schmidt’s defense of signing the 1776 Pledge, and why he thinks it’s a good thing. However, I am not publishing a piece by anybody suggesting Kansas public schools are teaching “critical race theory” — an obscure legal concept that even lifelong students of race relations had never heard until this year, when conservative activists have weaponized it. And yes, of course I realize that running on a platform of “getting canceled by The Star” can be an effective campaign technique to a certain audience."

Okay . . . So if none of it really matters why would TKC post about it at all???

Of course we're partial to every stupid & futile gesture.

Because this exchange reveals a fundamental flaw with a local institution and depicts the Kansas City Star attempting to serve as a political moderator and not a resources for readers.

Whilst readers throughout the ages have sought out all manner of content, perspectives and viewpoints.

Most adults don't need people telling them what to think.

Make no mistake, this debate has dominated the hearts & minds of newspaper readers for a couple of days whilst the rest of the Internets and the connected world quickly pass by dead-tree media and its outdated version of municipal discourse.

Derek Schmidt, Kansas' attorney general and Republican candidate for governor, is welcome to a guest commentary slot in The Kansas City Star - period. It simply has to stick to the facts. Schmidt called into Pete Mundo's show on KCMO Talk Radio July 6 to say The Star had " reversed course and refused to run any response " to a recent column criticizing him.