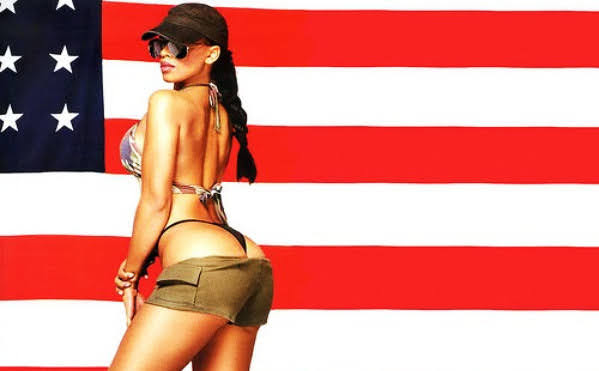 Right now we celebrate the patriotism of Canadian hottie Melyssa as we check pop culture, community news and top headlines for readers looking for a quick distraction from all of the weekend's American fun.

Woman, child shot near The Paseo and east 68th Street

KANSAS CITY, Mo. - A woman and a child were shot near The Paseo and east 68th Street in Kansas City, Missouri, on Saturday afternoon. Both of them suffered non-life threatening injuries and were transported to an area hospital. No other information about the victims or suspect was immediately available.

KANSAS CITY, KS (KCTV) --A shooting call at a credit union in KCK resulted in a large police presence and sent a bystander to the hospital with major injuries late Saturday morning. Police and medical crews responded after 11 a.m. to the Community America Credit Union near 78th Street and State Avenue in response to a shooting call.

TOPEKA, Kan. (AP) - Kansas is reporting that its tax collections for its just-concluded 2021 budget year were 9.3% more than anticipated. That left the state with its healthiest cash reserves in more than 25 years as the national economy recovers from the coronavirus pandemic.

JEFFERSON CITY, Mo. - Missouri Gov. Mike Parson has appointed his longtime campaign treasurer and family friend to become the clerk of his home county. Parson announced Friday that he had named Rachel Lightfoot to serve as Polk County clerk, effective July 16. The clerk oversees local elections, among other duties.

On this week's episode we're joined by two professionals from Truman Medical Centers/University Health as we head into Minority Mental Health Awareness Month.

It's July, which means it's trade season, and the Kansas City Royals have already made two moves to stoke the hot stove. Over the last 24 hours, the Royals have traded both Alcides Escobar to the Washington Nationals and Kelvin Gutierrez to the Baltimore Orioles for cash considerations.

"She Died On Her Terms": Melyssa Ford Opens Up About Her Mother's Medically Assisted Death And Says Goodbye To Hollywood Unlocked

Melyssa Ford publicly shared about her mother's death while also closing a professional chapter on Monday. The model and co-host of Hollywood Life's podcast, Hollywood Unlocked [Uncensored] was brought to tears as she recalled the emotions surrounding her mother's death in May. Her mother, Oksana Barbara Raisa Ford, died on May 19 after battling colon cancer.

Donald Trump is set to return to the campaign stage, if not the campaign trail, on Saturday with a rally in Sarasota, Florida. There are no national elections in the US this year but the former president maintains a grip on the Republican party ahead of the 2022 midterms and is toying with a run for the presidency in 2024, despite gathering legal problems in New York and elsewhere.

Attendees are being asked to get tested before the event and wear masks if they aren't vaccinated. A June Monmouth University Poll found many people still plan to hold back on July 4th celebrations. Around 67% of adults, and more than half of all Americans, have received at least one dose.

Jesse Watters said Friday on 'Tucker Carlson Tonight' that Vice President Kamala Harris' signature 'cackle' is a "defense mechanism" when she is faced with a question she can't answer or doesn't want to respond to, adding that it often is employed to lighten the interview - which he said notably failed during a recent back-and-forth with NBC News anchor Lester Holt.

What's Next For Voting Rights After The Supreme Court's Decision

subscribe to The NPR Politics Podcast podcast The U.S. Supreme Court decided a major case on voting rights that essentially gutted what's left of the Voting Rights Act. The court upheld two Arizona laws - one of which banned the collection of absentee ballots by anyone other than a relative or caregiver, otherwise known as "ballot harvesting"; the other threw out any ballots cast in the wrong precinct.

WASHINGTON (AP) - A ransomware attack paralyzed the networks of at least 200 U.S. companies on Friday, according to a cybersecurity researcher whose company was responding to the incident. The REvil gang, a major Russian-speaking ransomware syndicate, appears to be behind the attack, said John Hammond of the security firm Huntress Labs.

US troop withdrawal from Afghanistan terrifying for those in Taliban crosshairs

The departure of US troops from Afghanistan raises fears of far-reaching retribution by the Taliban - including the reversal of hard-won women's rights and the murders of anyone who sided with America.

RICHARD Branson is planning to beat Jeff Bezos in the billionaire space race as Virgin Galactic announced he'll be on their July 11 flight. Bezos announced earlier this month that he and his brother would be heading to space on July 20 on Blue Origin's New Shepherd spacecraft.

"To be able to stand behind a physical product is a really powerful feeling for me," says the pop star, who spoke to Billboard about shedding the CD, the details of her 'Music Box' release, and reducing her carbon footprint on her next album cycle.

Soldier and his mom reunite at Royals game Friday night


Cowtown As Seen From Above

Take a ride with the U.S. Navy Blue Angels over the Kansas City skies

Hide Transcript Show Transcript Nozzles. There's £42,000 of thrust. It's this here. Four. All right, Ready? Yeah. Okay, mm. The market potential seven off this century. The yeah. Okay. Part what? Yeah. Mhm. No, awesome. So let's start with a nice easy to G to the Yeah. All right, nice.

NEW CENTURY, Kan. - The U.S. Air Force Thunderbirds and the U.S. Navy's Blue Angels will make their first joint performance in Kansas City. But if you want to go to the Kansas City Air Show and see them this weekend, organizers say you need to plan ahead.

Saturday will be sunny, high near 89 degrees

Saturday will be sunny with light winds. Look for a high near 89 degrees.

Lorde - Solar Power is the song of the day and this is the OPEN THREAD for right now.