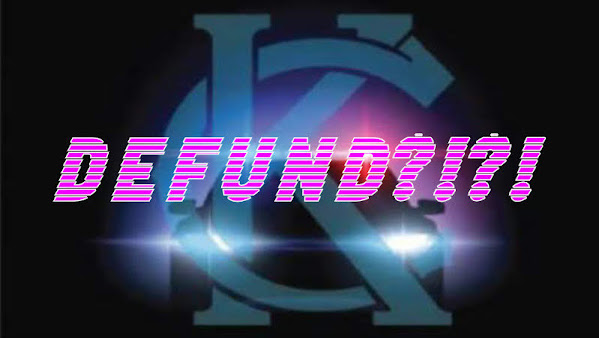 In Kansas City, newsprint is mostly used for propaganda.

For instance, here's an odd line from the daily newspaper that was written without any proof . . . We highlighted the sketchy assumption . . .

"In late May, the City Council voted to move $42 million dollars from one part of the police department’s budget to another account. The money will still be spent on police, once an agreement on the specifics is in place between the council and the police board.

In the first sentence of his brief,  Missouri Attorney General Eric Schmitt calls that defunding the police. That’s simply untrue.

Since the change could result in millions more in funding for the KCPD, we wish someone would defund us tout de suite."

The paper is practicing their French, that's cute . . . Here's some thing even more important . . .

WHERE'S THE BUDGET FOR THE 42 MILLION BUCKS WORTH OF POLICE FUNDING MAYOR Q WANTS TO 'REALLOCATE' TO FIGHT CRIME WITH SOCIAL JUSTICE?!? SO FAR THERE IS NOTHING IN WRITING OTHER THAN A DEMAND FOR THE CASH!!!

Again, TKC is the FIRST & ONLY news-ish outlet in Kansas City that keeps asking this question to no avail.

So far we've heard a great deal of chatter about "transparency" and "accountability" but nobody seems to be asking those same questions of Mayor Q.

This debate has lasted WEEKS but there's still NOT ONE DOCUMENT OUTLINING HOW MAYOR Q WILL SPEND POLICE CASH.

Obviously the newspaper wants locals to accept the deal sight unseen and based only on good faith . . . Of which there is none.

Right now there are only promises and assurances without any binding documentation from Mayor and his council supporters.

Any decent lawyer would laugh at that kind of deal and demand something more concrete.

Pundits are tragically delving into the same kind of weak legalese Mayor Q uses when he gets flustered or confronts some of the scathing criticism that has come his way over the past few months.

In Kansas City our newspaper trusts but doesn't verify any of the promises from a mayor who has become notorious for his double talk.

Missouri Attorney General Eric Schmitt has butted into Kansas City's business by filing a brief in the funding lawsuit between the Board of Police Commissioners and Mayor Quinton Lucas and the City Council.

KANSAS CITY, Mo. - Though there aren't protests every day, calls for reform within Kansas City, Missouri, Police Department aren't being ignored. "I don't think Kansas City is the only city with those problems by a long shot. I think most cities our size have many of those same problems," Leland Shurin, former president of the Board of Police Commissioners, said.