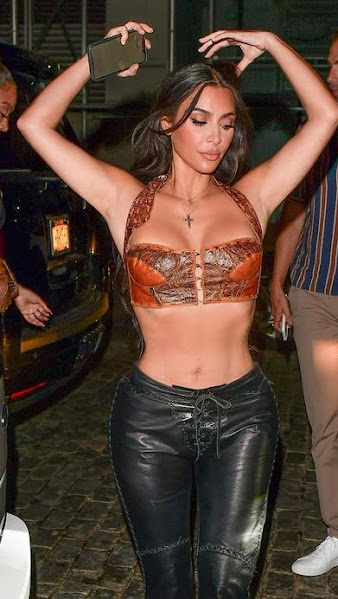 Tonight we take celebrate the hotness of future lawyer Kim K and her recently newsworthy outing along with a peek at community news, pop culture and top headlines.

A donation to The Beacon goes beyond the newsroom. We amplify community voices, share resources and investigate systems, not just symptoms. The Beacon in your inbox. In-depth reporting delivered every Tuesday and Thursday morning. Louise Lynch and her daughter contracted COVID-19 last year - and they haven't fully recovered.

A woman named Julie read from an impact statement last month as a Jackson County judge and several observers listened. Julie's husband and her counselor sat beside her."My truth is important," she told everyone in the virtual court hearing.

TOPEKA, Kan. - As lawmakers hold a series of meetings at the Kansas Statehouse to draw up lines for next year's elections, some Kansas groups are calling for transparency and more inclusion in the state's redistricting process.

KANSAS CITY, Mo. - Rhetoric against COVID-19 vaccines is "a bunch of baloney," according to Missouri's acting director of the Department of Health and Senior Services.

(CNN) -- Bob Dole, the longtime US senator from Kansas and 1996 Republican presidential nominee, said that while he is still "a Trumper," he is "sort of Trumped out," in an interview published Thursday by USA Today.

KANSAS CITY, Mo.- A new law could make it easier for prosecutors to free innocent prisoners. The Missouri Senate Bill 53 signed into law by Gov. Mike Parson will allow prosecutors to go before a judge and have convictions of people wrongly imprisoned reversed.

'We are in trouble': Kansas City hospital leaders to call for new mask mandates

Kansas City-area hospital leaders are expected to call for new mask mandates, one top hospital official said Thursday, as the region grapples with an influx of COVID-19 patients that's nearing a crisis point.


Hottie Drops In On Ex-Husband

Kim Kardashian and Kanye West are going through a divorce, but they're still celebrating each other's milestones as a family ... including the release of his 10th studio album. Kim and all 4 of their kids -- North, Saint, Chicago and Psalm -- are part of the large crowd Thursday night at Atlanta's Mercedes-Benz Stadium to enjoy a listening event for Kanye's highly anticipated "Donda" album ...

CNN's heavily promoted town hall event with President Biden failed to resonate with Americans on Wednesday night, as it got thumped by Fox News and even finished with a smaller audience than MSNBC. The CNN Biden town hall, moderated by Don Lemon, averaged only 1.5 million viewers from 8-9:30 p.m.

Dems are 'not particularly pleased' with the Senate infrastructure deal. They'll back it anyway.

In interviews Thursday, Democratic senators said they expected all 50 members of their caucus to sign on to the final product, with the assurance that their $3.5 trillion social spending proposal will include their top priorities.

FBI says it got more than 4,500 tips on Kavanaugh, providing 'relevant' ones to White House

The FBI disclosed that it received more than 4,500 tips on a phone line in 2018 as part of a background investigation into then-Supreme Court nominee Brett Kavanaugh and provided "relevant" ones to former President Donald Trump's White House counsel.

WASHINGTON - Lawyers for the state of Mississippi urged the U.S. Supreme Court on Thursday to overturn Roe v Wade, taking a more aggressive approach than the one presented when they asked the court a year ago to hear the case.

Delta variant is one of the most infectious respiratory diseases known, CDC director says

The delta Covid variant is one of the most infectious respiratory diseases ever seen by scientists, the director of the Centers for Disease Control and Prevention said Thursday. The variant is highly contagious, largely because people infected with the delta strain can carry up to 1,000 times more virus in their nasal passages than those infected with the original strain, according to new data.

US strikes Taliban and captured equipment in support of Afghan forces

The US military carried out two strikes against the Taliban overnight in support of Afghan forces in the Kandahar province, multiple defense officials said, targeting captured equipment.

WASHINGTON - The United States imposed sanctions on Cuba's defense minister and the communist nation's special forces brigade for the repression of peaceful protests that broke out on the island last week. The sanctions mark the first steps by the Biden administration to apply pressure on the Cuban government as Washington faces calls to show greater support for the protesters.

Jennifer Lopez looks as young as ever. The 51-year old, who turns 52 on Saturday, was spotted out-and-about in West Hollywood, Calif., on Thursday, July 22 sporting a trendy white and dark blue jumper. She also wore dark-colored platform shoes, large black sunglasses and a white bracelet.

"While it could not be a better time given our Yoli growth, I still wake up a little weirded out that all I have to do in a day's work is to focus on Yoli," Marissa Gencarelli said. "That is a very strange feeling, but I'm fully embracing it."

The Royals could look a lot different in August

If you close your eyes and transport yourself back to 2011-you know, shortly after television was invented, or thereabouts-the Kansas City Royals were a sorry, sorry franchise. It had been a quarter century since they had last went to the playoffs, and eight years since the team had a winning record.

Since Super Bowl LV, most conversation about the offensive line of the Kansas City Chiefs has stayed at the surface level, and anyone who watched that game understands why. Patrick Mahomes, the Chiefs' franchise quarterback and arguably the most exciting player in the National Football League, scrambled for four quarters like he was the last man standing in a game of dodgeball.

KANSAS CITY, Mo. - John P. McMeel was co-founder and chairman emeritus of the Kansas City business Andrews McMeel Universal (AMU), formerly the Universal Press Syndicate. The name may not be familiar, but the company's products undoubtedly are. McMeel's company published iconic comics likeCalvin and Hobbes and Garfield, as well as new hits like the poetry book Milk and Honey.

Hide Transcript Show Transcript WINDS HAVE SWITCHED. THAT IS AN INDICATION THAT THINGS ARE GOING TO STAY PRETTY TOAS FTYOR A WHILE. 87HE T NEXT HOUR OR TWO. IT :00 P.M., 84. WE FINALLY GET INTO THE 70'AS LITTLE LATER, PROBABLY CLOSER TO MIDNIGHT, AND THAT IS ANOTHER INDICATION WE ARE GOING TO START OFTEN WARMER THAN WE DID THIS MORNING.