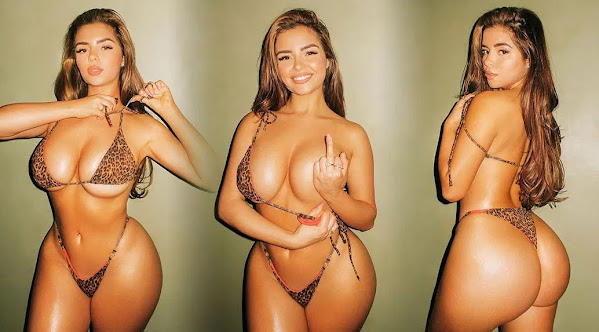 This evening we share out admiration of hottie Demi along with a peek at pop culture, community news and top headlines.

KANSAS CITY, MO. - For those planning to attend the Gucci Mane concert August 1st at Liberty Memorial, they may be able to get a COVID-19 vaccine. The same goes for the Garth Brooks concert at Arrowhead Stadium August 7th.

OVERLAND PARK, KS (KCTV) -- The Overland Park Police Department is investigating a shooting that happened on Monday night. According to the police, the shooting happened on the first level of a parking garage at the Promontory Apartments around 8:48 p.m. That apartment complex is in the area of W.

KANSAS CITY, Mo. - A replica ship of the USS Kansas City is on display at Union Station. Earlier this month, crew members unveiled the ship as part of Navy week. In the video, FOX4 photojournalist Jon Haiduk introduces you to the model maker of the exhibit.

Demi Rose leaves little to the imagination in lace bodysuit

She's become known for her scantily-clad snaps she posts online. And Demi Rose didn't disappoint on Monday as she stripped down to her underwear to showcase her famous curves. The influencer, 26, looked incredible as she left little to the imagination in a maroon halterneck lace bodysuit that revealed her pert behind.

Government leaders to their workers: Get vaccinated or get tested

OAKLAND - California, New York City and the Department of Veterans Affairs on Monday announced that their own government employees must get vaccinated or get tested regularly, stopping just short of an absolute mandate as the nation experiences an alarming resurgence of Covid-19.

Senate Democrats will seek a pathway to citizenship for as many as 8 million undocumented immigrants in a broad economic package they want to pass this year, according to a Senate Democratic aide familiar with the plan.

PolitiFact appears to be shielding President Biden and Vice President Harris from criticism over their past rhetoric expressing distrust in the coronavirus vaccine during the Trump administration. Amid the Biden administration's struggle to vaccinate Americans, a video surfaced comments made during the 2020 election cycle by the then-Democratic ticket that cast doubt in a vaccine developed under President Trump.

That PDA! J. Lo Rings in Birthday With Ben Affleck in France

Ain't it funny! Jennifer Lopez rang in her 52nd birthday in France with her boyfriend, Ben Affleck , and the couple couldn't have been more adorable. The "Get Right" singer and the actor, 48, made their most public appearance yet on Saturday, July 24, celebrating Lopez's big day while at L'Opera in St Tropez, France.

COLUMBIA, MO (KCTV) -- Mizzou Athletics Director Jim Sterk has agreed to step down from his position once a replacement is found. This is apparently a mutual agreement between the University of Missouri and Sterk. "We are grateful for the dedicated leadership Jim has provided over the last five years to position Mizzou for even greater success," University of Missouri President Mun Choi said.

Who saw this coming? Not me. Coming into this week, the Royals looked like a team hardly interested in playing the last half of the season. They'd just lost a series to the Baltimore Orioles after five days off and a first-half plagued by multiple losing streaks.

Hide Transcript Show Transcript WE MADE AND DENTS IN THE WEEKEND, AND NOW, WE'RE INTO THE THICK OF THINGS. NOT MUCHIN WD TO STIR THINGS UP AND TRY TO MIX IT UP EVENLY SO IT'S ALL KDIN OF HEAVIER PARTICLES THAT ARE CLINGING VERY CLOSE TO THE GROUND ITSF.EL TEMPERATURES STILL 90 DEGREES, A HEAT INDEX OF 91, SO VERY CLOSE TO THE TEMPERATURE.