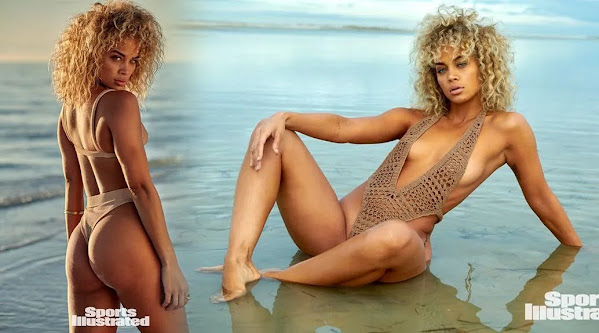 Our favorite sportz mag in the whole world released a bunch of promo pix of their upcoming swimsuit issue today and this inspires our peek that offers a glimpse at pop culture, community news and top headlines.

Sweating It Out On The Plaza

Plaza residents without air conditioning for months after move-in

KANSAS CITY, MO (KCTV) -- People living in the Plaza Club City Apartments say they've been without A/C for months. About four weeks ago, management replaced the chillers in the buildings. Tenants say that fix only gave relief to some. When Abby Kerber moved in she said she didn't get any warning upfront about the broken A/C.

Despite ongoing need and the looming expiration of the federal eviction moratorium on July 31, Kansas City, Missouri, is no longer accepting new applications for its emergency rental assistance program.

Two hospitals owned by HCA Midwest Health, one in Missouri and the other in Kansas, were sued last year by National Nurses United. At issue was whether the hospitals' plans to replace bargaining unit nurses with supervisory nurses were covered by arbitration provisions under the hospital's collective bargaining agreements.


Cash To Save Community History

KANSAS CITY, Mo. - A $75,000 grant will help jump start a project to restore the Rector Mansion in Kansas City. On the corner of 12th Street and Euclid Avenue is a hidden treasure. The Rector Mansion use to belong to Sarah Rector, the richest 12-year-old Black American at that time.

SOURCE: KMBC Overland Park police are investigating a fatal crash on the ramp to eastbound Interstate 435 from northbound U.S. 69 Highway.The wreck was reported at 2:19 p.m.Police said the car was traveling north on U.S.

by: Heidi Schmidt Posted: / Updated: KANSAS CITY, Mo. - The Missouri Department of Transportation has a big goal. The department hopes to find 60 new employees, and it's hoping City Union Mission can help. Representatives from MoDOT will be at the mission's Christian Life Center until 11 a.m.

From bikini fittings to the post-show party, see how Jasmine Sanders spent her time during Miami Swim Week

President Joe Biden on Monday walked back some of his prior criticism of Facebook, saying he meant to accuse a handful of the social media platform's users of spreading deadly lies about Covid vaccines. "Facebook isn't killing people," Biden said.

At least that's what the former president is telling his dinner buddies. Trump has told at least three people he's dined with in recent months that he plans to run in 2024, a former senior official at the Republican National Committee tells Rolling Stone.

Covid-19 vaccine myths: These reasons for not getting a shot don't hold up. In fact, they'll set the US back

No, you can't get Covid-19 from the vaccine. Yes, doctors say young people need to get vaxxed (for several reasons). Here are 9 of the top myths fueling vaccine hesitancy, and why failing to get a shot could ruin other people's vaccinations.

Vice President Kamala Harris tested negative for COVID-19 after meeting with several Texas House Democratic lawmakers who recently contracted the virus, White House Press Secretary Jen Psaki confirmed on Monday. "I think the vice president's office put out that she was tested and there was no detection of COVID-19," Psaki said.

KANYE West broke down in tears on stage at his new album launch after playing a song about his divorce from Kim Kardashian. His new track Welcome to my Life includes lyrics about his tough last two years, which included his split from the reality star, a meltdown on Twitter and his failed bid to become US President.

Jamie Lynn quickly edited her shady caption after Britney hit back with a scathing message of her own, escalating the feud between the sisters.

Arrowheadlines: At +500, the Chiefs are Vegas' favorites to win Super Bowl LVI

5 NFL future bets to make right now | Fox Sports Chiefs +500 to win Super Bowl (bet $10 to win $60 total) You might remember this pick from back in April, immediately after the NFL Draft. Kansas City was +550 to win the whole enchilada back then (bet $10 to win $65 total), so the price has shortened a little bit.

It's time for the Royals to follow their own advice on being "transactional." They won't.

The Kansas City Royals and the Tampa Bay Rays share a lot of similarities. Both clubs wear blue. Both clubs play in the American League. Both clubs are small market teams with small payrolls. And, most importantly, both clubs have managed to make the most of it, with each franchise managing to win two American League pennants apiece in the last 15 years.

by: Heidi Schmidt Posted: / Updated: KANSAS CITY, Kan. - Sporting KC is teaming up with the Unified Government Public Health Department in an effort to kick COVID-19 out of the metro. The health department will be on hand at upcoming Sporting KC matches to offer free vaccinations to fans attending the game.

It's not even Halloween, but Kansas City Chiefs wide receiver Tyreek Hill has created a new alter ego for himself. It's not as a television cameraperson or an expert gymnast who can perform backflips. Instead, it's as "Grandpa Cheetah." The 27-year-old NFL star made it public with an Instagram post on Sunday.

Get ready for the Summertime sizzle! It returns this week as the heat & humidity build back into the area. Rain will be limited as a ridge builds in, leaving us with temperatures soaring back into the 90s. We are tracking that summer surge in the updated forecast here!

deadmau5 & Lights - When The Summer Dies was the song of the day and this is the OPEN THREAD for right now.