Kansas City News Monday: Back To The Grind Collection 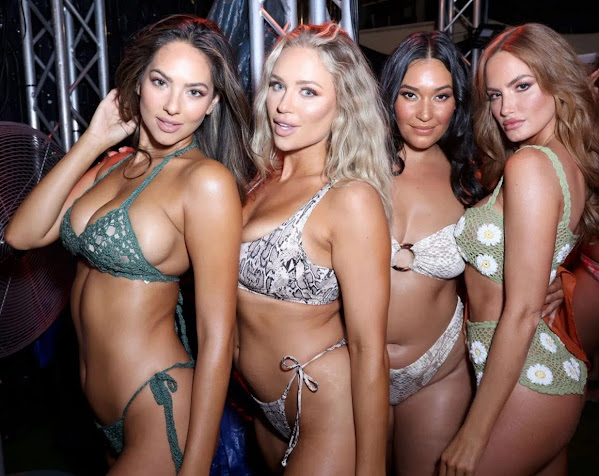 Longtime readers know that we always try to take it easy on Monday (and most other days) but we return to the work week with a newsworthy peek at hottie Haley and her friends at a recent diverse, newsworthy and promotional swim party which also inspires us to check on pop culture, community news and top headlines.

Volunteer couple pay it forward to provide water to the homeless

Kansas City, Mo. - When the Salvation Army isn't bell ringing during the holidays, they're honking and hollering during the hot summer months. "Honk & Holler" is an outreach program for the homeless and this year, they're running low on bottled water.

Detectives with the Kansas City, Missouri Police Department are searching for witnesses after an afternoon homicide that left one person dead. Officers were dispatched to the 3000 block of Kensington Avenue to investigate a shooting around 4:15 Sunday afternoon.When they arrived, police said officers found a man suffering from apparent gunshot wounds.

Researchers are looking for lost graves near the Shawnee Indian Mission

KC Animal Shelter Dealing With a Post-Pandemic Onslaught of Pets

At the start of the COVID-19 pandemic, KC Pet Project wasn't particularly crowded. There were fewer pets coming in, and interest in adoptions and fostering was soaring as people sheltered at home. Despite growing interest in adopting, there weren't many animals to give away, leading to long waits.

SI Swimsuit model Haley Kalil says people are shocked by her science degree: 'It about changing the narrative'

EXCLUSIVE: Haley Kalil is all about proudly flaunting her brains and beauty. The Minnesota native made her Sports Illustrated Swimsuit debut in 2018 after participating in the franchise's first-ever open casting call. She was named the co-winner alongside Camille Kostek. This year, she's back for the upcoming issue which is slated to drop sometime this summer.

Listen up: Biden speaks volumes in a whisper to make a point

President Joe Biden was at a public transit station in Wisconsin, talking about repairing roads and bridges, when he shifted gears and began defending his plan to send money to parents for each minor child, payments some critics call a "giveaway." Biden folded his arms, rested on the lectern, leaned into the mic and lowered his voice.

Former President Trump in Fox Nation interview: 'You have to give police back their authority'

Former President Trump sat down with " Fox & Friends" enterprise reporter Lawrence Jones at CPAC in Dallas, arguing that in order to curb crime, "you have to give police back their authority."

U.S. Navy officials dismissed claims China drove away one of its warships that passed through the disputed Paracel Islands on Monday, saying Beijing's statement is "false." The USS Benfold carried out a maneuver near the small archipelago earlier today, located east of Vietnam and south of China, which the U.S.

The top US general in Afghanistan will step down on Monday as the United States' military withdrawal from the country nears completion.

'We are no longer afraid': Thousands of Cubans protest against the government

Thousands of Cubans took to the streets across the country on Sunday in an unusual protest in which civilians shouted slogans against the Communist government, such as "We want freedom" and "We are no longer afraid."

Billionaire Sir Richard Branson has successfully reached the edge of space on board his Virgin Galactic rocket plane. The UK entrepreneur flew high above New Mexico in the US in the vehicle that his company has been developing for 17 years. The trip was, he said, the "experience of a lifetime".

Billie Eilish Responds To Haters: 'My Tits Are Bigger Than Yours'

We're a bit under three weeks away from a new Billie Eilish album. While fans are excited for Happier Than Ever, which is set to drop at the end of the month, there are also those who think that Eilish is experiencing a bit of a sophomore slump.

PrettyLittleThing kicked off Miami Swim Week with a bang. Fitness influencer Bruna Lima - who is 8 months pregnant - walked the runway show sponsored by Grey Goose on Thursday night in a cream bikini from the PrettyLittleThings' swimsuit collection that showcased her baby bump.

Hok Talk: What to make of Matheny's "chase every win" philosophy?

In case you missed it, former Royals.com and Kansas City Star beat writer Jeffrey Flanagan decided to go on cocktail-fueled rant last Wednesday evening. What I want to know is how come when he does it it's considered newsworthy but when I do it the police warn me about "disturbing the peace" and "No, you can't just ferment cigarette butts to create a smoky liqueur!"

Eat This Now: The Crustacean Sensation at Blu Hwy

The Crustacean Sensation from Blu Hwy. // Photo by April Flemming A dish called the "Crustacean Sensation" seems like something you might find in a stall at Oceans of Fun rather than in a brand new fine-dining space. But if you find yourself either ordering this dish as takeout from the new South Plaza restaurant Blu Hwy (which as of...

The Kansas City Royals are bringing in a new player - and this one is fresh out of high school.The Royals had the seventh pick in the first round of the Major League Baseball draft Sunday night, and they used it to grab an 18-year-old University of Connecticut commit.

KANSAS CITY, MO (KCTV) -- A Silver Alert has been canceled after 71-year-old Oliver James was found safe Monday morning. Kansas City police say he returned home on his own. James was last seen about 6 p.m. Sunday by a neighbor at the intersection of East 39th Street and Bales Avenue.

Cloudy with a few sprinkles possible to start, sunny afternoon

Hide Transcript Show Transcript NICK: FIRS ATLERT RADAR THIS MORNING. WE CAN SEE LITTLE BIT OF RAIN HERE TO THE EAST OF KANSSA CITY FROM SEDALIA 50 HIGHWAY BACK TO EASAPLNT HL.IL HERE INSIDE THE 435 LOOP, WE HAVE DRIZZLE THAT'S FALLING OUT OF THERE.

Billie Eilish - NDA is the song of the day and this is the OPEN THREAD for right now.