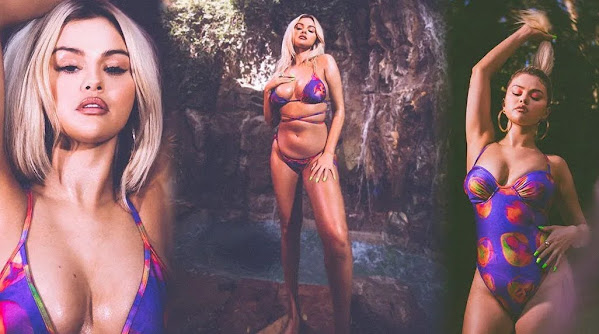 Right now we take a peek at diva Selena Gomez making a political statement with her hotness and that inspires us to check pop culture, community news and top headlines.

One person is dead after an early morning crash Wednesday -- the impact from the crash was so strong the vehicle was split in half. Police said that incident happened on the ramp from southbound I-435 to U.S. 40 Highway in Kansas City, Missouri.

LEAVENWORTH, Kan. (AP) - The U.S. government has agreed to pay nearly $7 million to settle claims from eight veterans that they were sexually abused by a former physician assistant at a Veterans Affairs hospital in Kansas.

TOPEKA, Kan. - Kansas lawmakers plan to hold 14 town hall meetings across the state to gather opinions later this summer and fall on how the Legislature should redraw political boundaries next year. Six legislative leaders agreed Wednesday to have the same number of town hall meetings that lawmakers held ahead of the last redistricting in 2012.

Can Missouri Get Out Rental Assistance Fast Enough To Prevent Evictions?

Missouri has more than $300 million available in federal housing relief assistance and another $270 million on the way. But with the federal eviction moratorium set to expire July 31, can the state get this money out the door fast enough to keep Missourians in their homes? Since Feb.

KANSAS CITY, Mo. - Kansas City Chiefs fans began reserving tickets Wednesday to training camp in Saint Joseph, Missouri. The team is returning to the campus of Missouri Western State University later this month. Most practices will be free to the public, but you do need a ticket.

We love Selena Gomez for many a-reason, and her latest bikini and swimsuit photoshoot - which appears to be entirely unedited and Photoshop-free - is just one. Her millions of fans are also loving the photos and are pretty much all saying the same thing, too: how refreshing it is to see a celebrity posing without any retouching.

President Joe Biden is increasingly dropping his "Uncle Joe" persona with reporters as pressure mounts on the White House to notch legislative accomplishments before the 2022 midterm elections. Biden's growing frustration with "negative" questions suggests the end of his press honeymoon, but it also poses problems for the White House communications team as reporters regain access to the president thanks to the easing of pandemic social distancing requirements.

Rudy Giuliani's law license has been suspended in Washington, DC, after he temporarily lost his license in New York for pushing election lies and that state court system looks further into his case.

Fourteen days after the catastrophic collapse of the Champlain Towers South condo building in Surfside, Fla., officials have called off the search for survivors. "Our top priority since Day 1 has been to do everything possible, everything humanly possible, and to explore every single portion of the collapsed grid in search of survivors," said Miami-Dade County Mayor Daniella Levine Cava at a press conference Wednesday evening.

The White House Wednesday sought to clarify its new door-to-door coronavirus vaccine push amid fresh criticism from the right that the home visit approach is government overreach. White House press secretary Jen Psaki stressed Wednesday that no one from the federal government will be showing up at Americans' doors mandating coronavirus vaccinations.

Four months after City Girls single " Twerkulator" leaked and became a hit on TikTok, it's finally time for the official video. Directed by the iconic Missy Elliott, we should've known the video wouldn't be anything short of spectacular.


Home Team Hands Over Another

The Royals couldn't piggyback their impressive come-from-behind win on Tuesday night, as they dropped the rubber match to the Reds on Wednesday afternoon, 5-2. Coming into the day, Brady Singer hadn't pitched six innings since June 11th at Oakland. One of the glaring reasons as to why Singer struggled to work deep into games was because of his first inning issues.

Want to bring an issue to the City Council's attention? Here's how to do it.

by: Juan Cisneros Posted: / Updated: STATELINE, Nev. - For the second consecutive year, Kansas City Chiefs duo Travis Kelce and Patrick Mahomes will tee off for the American Century Championship charity golf tournament at Lake Tahoe. Practice rounds got underway on Wednesday ahead of the first round on Friday.

Staggering numbers on the U.S. job market. A new report shows 9.2 million job openings. That's a record high.There's a large gap between labor supply and demand. Local employers are desperate to hire. As they compete for workers, they know they have to step up recruitment efforts.Things are moving again at this fitness class at the Paul Henson YMCA in Prairie Village.

With a more contagious strain of COVID-19 spreading throughout Missouri, Gov. Mike Parson said Wednesday there could be an announcement as soon as next week about incentives to get people vaccinated. But Parson said he's not a huge fan of offering people financial inducements to get a shot, which studies show has proven to be the most effective way to keep people out of the hospital and alive.

How 4 Kansas City-famous foods were invented

Kansas City has more than its fair share of famous foods. The city is best known for barbecue, of course, but, lately, it's also gotten attention for having one of the country's best Mexican food scenes.

Good morning! It's a quiet start for most of us with some clouds and temperatures in the upper 60s and lower 70s. A cold front is expected to drop through the area later today sparking some scattered showers and thunderstorms later this morning into the afternoon hours.

City Girls - Twerkulator is the song of the day and this is the OPEN THREAD for right now.