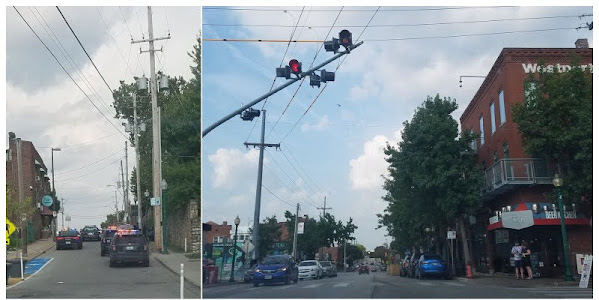 In this update we'll round-up up some of the more interesting local crime stories and the ruckus we witnessed in Westport just moments ago . . .

And so, here's the somewhat regional www.tonyskansascity.com collection . . .

The Kansas City Police Department (KCPD) provided further details on a shooting that occurred on July 21 after the victim died July 29. On July 21 at about 8:15 p.m. officers were dispatched to 17th and Belmont on a shooting call. Officers located an adult male shooting victim who was transported to the hospital in critical condition.

KANSAS CITY, Mo. - The death of 32-year-old man found Friday in a midtown Kansas City, Missouri, apartment has been ruled a homicide. A caller alerted police at about 3:45 a.m. to an unresponsive man inside an apartment in the building at 105 W. 39th St.

by: Makenzie Koch Posted: / Updated: KANSAS CITY, Mo. - A Lee's Summit man has been sentenced to prison in a 2020 deadly shooting outside an Independence home. In May, a jury convicted 24-year-old Arieous K. Walton-Merritt of involuntary manslaughter and armed criminal action.

EMPORIA, Kan. - A former maintenance manager at the Tyson Foods plant in Emporia has been sentenced to 27 months in prison for a fraud scheme that cost the company more than $416,000. David John Ranger was sentenced Wednesday after pleading guilty in April to one count of wire fraud, The Emporia Gazette reported .

A small town famous for being the childhood home of Mark Twain is stirring headlines for a more sinister reason. The disappearance of Christina Whittaker from Hannibal, Missouri, is the subject of a new true-crime docuseries on discovery+ titled "Relentless."

by: Mark Feuerborn Posted: / Updated: TOPEKA (KSNT) - The majority of violent crime is down in Topeka for the summer; not just below 2020 levels, but 2019 as well, according to a new report from the Topeka Police Department.

KANSAS CITY, Mo. - Missouri Gov. Mike Parson joined people from various law enforcement agencies around Kansas City on Friday to ceremoniously sign Senate Bill 53, which among other things, relaxes residency requirements for law enforcement officers. It's something the Kansas City Board of Police Commissioners agreed with and voted to drop earlier this week.