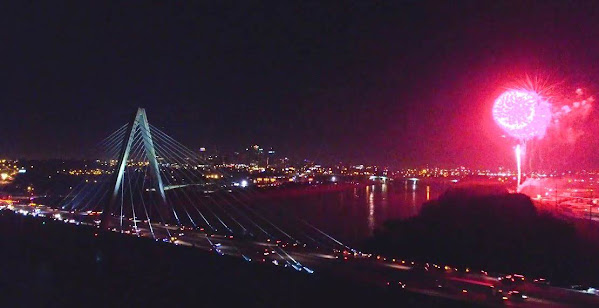 Tonight we ventured out into the world in order watch some fireworks and get a good look at American exceptionalism in the few precious moments before the era of Chinese hegemony.

Nevertheless, for the most dedicated denizens of the TKC discourse we share this overnight view of pop culture, community news and top headlines.

We'll talk about the pitching in a bit, but I wanted to focus on the offense first. If you watched the bottom of the first inning, you'd be forgiven for walking away from the game believing the Royals were just going to keep up their usual 2021 offensive shenanigans.


Tragedy In The Dotte Today

Innocent bystander dead after shots fired during altercation in KCK

by: Juan Cisneros Posted: / Updated: KANSAS CITY, Kan. - Just before noon Saturday, two individuals were involved in an altercation in a retail store in Kansas City, Kansas when one of the people went to the trunk of their car and retrieved a gun from their vehicle and began shooting at the other.

A Kansas City woman plunged 50 feet to her death after she slipped from a cliff at a Missouri state park, according to officials. Mariah Brielle "Elle" Schramm climbed to the top of a rocky bluff following a swim with a group of friends in Johnson's Shut-Ins State Park on Saturday, KSDK reported.

She earned 21K followers with a plastic circle; now Angela Presnell hoops to translate social media popularity into a career

"I went into college not knowing what I wanted to do," said Angela Presnell. "At 18, how are you supposed to know? But you try things out, and then you just know. I knew I wanted to be a teacher, but I'm not passionate about the education system. ...


Deep Inside The Pr0n Game

The governor's office denied reports it asked Trump organizers to postpone the Sarasota rally. DeSantis has discouraged talk of a 2024 White House run, saying he's focused on his current job. Trump, who's hinted at a presidential re-run in 2024, has expressed annoyance at DeSantis' rise.

EXCLUSIVE: Texas Republican Rep. Ronny Jackson, the former White House physician for Donald Trump, called on Democrats to follow through with their prior demands regarding a president's cognitive ability and have President Joe Biden assessed. Following speculation on Trump's mental aptitude one year into his presidency, he agreed to take the Montreal Cognitive Assessment (MoCA) - a 30 point exam that tests for memory impairment.


No Hope For Veep

She's Hillary 2.0. Vice President Kamala Harris' very bad week amid revelations of a toxic office culture is giving some Dems troublesome flashbacks to Hillary Clinton - with some in her party worried she won't be able to beat any GOP candidate in the future.

A fire on the ocean surface west of Mexico 's Yucatan peninsula has been extinguished, state oil company Pemex said, blaming a gas leak from an underwater pipeline for sparking the blaze captured in videos that went viral.

British internet sensation Demi Rose updated her popular Instagram profile with a stunning new snapshot. In the update posted a few hours ago, the 26-year-old brought the sizzle to her 16.9 million followers on the platform with a picture of herself in a scanty, two-piece swimsuit.

BLUE SPRINGS, Mo. - A former Blue Springs Wildcat gets a dream opportunity for play for the Chiefs. Darrius Shepherd returns home to Kansas City for his 3rd season in the NFL. "Yeah it's amazing man, having friends and family in the area and having the familiarity in KC, I'm super excited to go play for the home team and it's a dream come true," Shepherd said.

As the United States prepares to celebrate its 245th birthday on Sunday, the Kansas City Royals invited a special guest to kick off Independence Day weekend. Mabel Johnson, a 106-year-old World War II veteran, threw out the first pitch Friday at Kauffman Stadium ahead of the Royals beating the Minnesota Twins 7-4.

The only thing quiet in our area this holiday weekend will be the weather. Clear skies and light southeast winds will help send temperatures overnight into the mid to upper 60s. Look for plenty of sunshine on Sunday with highs back near 90 degrees and humidity levels remaining in check.

And once again, as is our Saturday night tradition, we share a quick playlist of appropriate songs for this weekend party.

An anthem from Miley back in her more innocent early 20s . . .

The only song that really matters that even includes a Kansas City shout out . . .