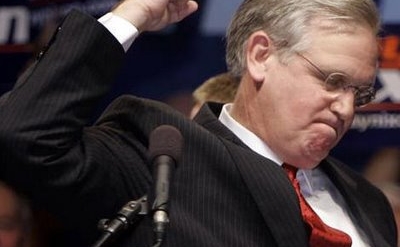 Because so many of our Midtown friends REFUSE to remember . . .

Despite Prez Trump playing the PERFECT BOOGEYMAN, the Missouri Democrats suffered a STATEWIDE SWEEP by the GOP in 2020.

The reality is that the Missouri Democratic Party is in shambles, without confidence in their leadership and mired in a dilemma of competing interests amongst old school loyalists, progressives, ambitious white ladies and the increasingly powerful African-American voting bloc that knows they can make or break the fortunes of any statewide Democratic Party leader.

On the bright side, it can't get too much worse for Super-Minority Missouri Democrats in Jeff City.

Yet this opt-out must sting party leaders . . .

Here's the money line/tweet released by the former Guv moments ago . . .

"While I deeply appreciate the many people who have reached out and acknowledging folks' angst about the track of our country's divisive politics, I believe I will be more effective outside of this partisan back and forth."

Before the riots in Ferguson, Missouri blew up in his face . . . Then Missouri Guv Jay Nixon was one of the strongest Democratic Party leaders in the nation and that early favorite to earn the VP nod on Hillary Clinton's (doomed) ticket.

A cringe-y interview with Anderson Cooper killed those dreams as the embattled leader couldn't figure out how to balance legit concern for civil rights vs. defending violent attacks against police and neighborhoods.

Rioters & looters torched a rather nice QT and Little Caesars whilst he was trying to make up his mind.

And so the Missouri Dems desperately search for another candidate but won't find much name recognition on their bench.