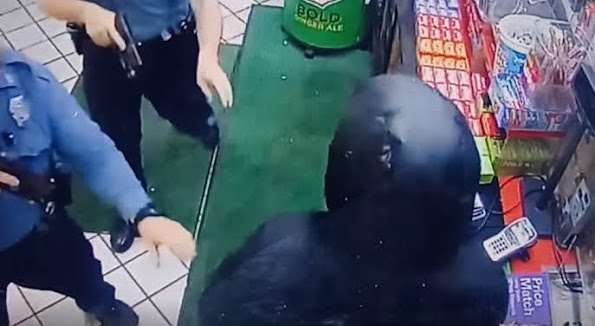 A highly touted clip of a recent, deadly police shooting reveals the last moments of a suspect with a warrant for his arrest and a long criminal record struggling with cops before he was killed by gunfire.

There wasn't any "execution" visible.

THE MINISTERS TRICKED KANSAS CITY NEWISES INTO HYPING THEIR CLAIMS BUT FAILED TO OFFER ANY KIND OF CAPTIVATING CONTENT!!!

TKC won't speculate on what calling the cops murderers without evidence will do to a person's reputation . . .

< p>However . . . We know for a fact that newsies HATE being misled and the promise of an "execution" caught on video is good enough to garner interest but the failure to deliver shock video means that these very same journalists will be a lot less likely to listen to complaints from ministers next time around.

Call it "crying wolf" or overzealous advocacy . . . Big picture: Standing up against police brutality is important and the dearth of evidence in this case makes it harder for other victims to come forward.

Here's the story according to more trusting souls . . .

A group of faith leaders and the family of a man shot and killed by police in Kansas City on March 25 are taking issue with the police reports of what happened. The group released surveillance video of the killing, which took place at a gas station near 63rd Street and Prospect Avenue.

Several pastors met with the Missouri State Highway Patrol Wednesday to turn over video evidence in the police shooting of Malcolm Johnson. Johnson was fatally shot by KCPD officers in March while they were trying to arrest him in connection with an assault case.

LEE'S SUMMIT, Mo. - Local clergy met with the Missouri State Highway Patrol on Wednesday to hand over surveillance video in a Kansas City police shooting. An officer shot and killed Malcolm Johnson back in March after police say he fired first.

Black Lives Matter supporters held a vigil outside the BP gas station on 63rd Street and Prospect Avenue to remember a man shot and killed by police in March.About 60 people attended, saying the death of Malcolm Johnson could have been avoided.