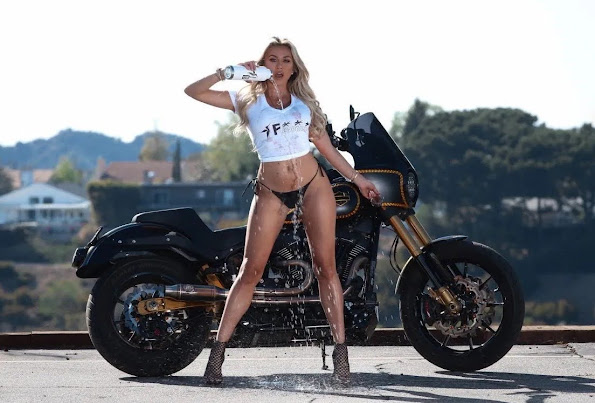 Right now we're inspired by hottie Khloë doing a bit of promo work cleverly disgused as modeling whilst we take a peek at pop culture, community news and top headlines.

KANSAS CITY, MO (KCTV) -- Multiple injuries have been reported after a Kansas City fire truck was involved in a crash Wednesday while heading to a call. This multi-vehicle wreck happened about 12:20 p.m. near the intersection of Northeast 96th Street and North Oak Trafficway in the city's northland.

Nikki Lansford Editorial Assistant The Colonnade at Concourse Park is a historic landmark that means a great deal to many in the Northeast community - its image even serves as the emblem of the Northeast News - but the structure has fallen into disrepair after decades of neglected maintenance.

The Many Faces of Kansas City's Music Scene

The following is a piece in a four-part series highlighting all that Missouri has to offer in the worlds of food, art, music and adventure. Missouri - or "Mo," as we refer to her - has no shortage of places to explore, so whatever you're after, there's a Mo for every M-O.

You already know Khloe Terae from her sizzling Maxim South Africa cover and crazy-hot video parts, and if you follow the curvaceous Canadian model on Instagram, you also know that she has a penchant for posing topless for ad campaigns, photo shoots and selfies.

President Joe Biden on Thursday revoked a series of executive orders signed during the Trump administration targeting TikTok, WeChat and other Chinese apps, and replaced them with a new executive order addressing apps linked to foreign adversaries, including China.

Americans Are Dangerously Divided on the Insurrection

On Tuesday, more than a week after Republican senators filibustered and blocked the creation of an independent commission to investigate the Jan. 6 attack on the U.S. Capitol, Senate Minority Leader Mitch McConnell was asked whether he would call the events of that day an insurrection.

Vaccine advisers to the US Centers for Disease Control and Prevention say there has been a higher-than-expected number of cases of a heart ailment among young people, most often males, who've recently received their second doses of the Pfizer and Moderna Covid-19 vaccines.

G7: 'Mount Recyclemore' of leaders made from electronic waste in Cornwall

Bennifer's rebooted! Why is Ben Affleck and Jennifer Lopez's reunion so cheering?

rangelina. Kimye. Tomkat. Gyllenspoon. Each pairing is yet another note in the long, sad dirge of failed Hollywood romances. Blending famous monikers has been a showbiz tradition for decades, even if most of these fusions fizzle out quicker than you can say "Vaughniston" (you remember: Vince Vaughn dated Jennifer Aniston for about a minute after her breakup with Brad Pitt).

KANSAS CITY, Mo. - A Kansas City gym owner is using Pride Month to push for more inclusivity within the fitness community. When Hailee Bland-Walsh opened City Gym 10 years ago, she did so with a simple goal in mind.

by: Juan Cisneros Posted: / Updated: FRISCO, Texas - NW Arkansas Naturals shortstop Bobby Witt Jr. blasted a pitch 430 feet for his second homerun of the night on Tuesday, but the home plate umpire said he did not touch home plate.

Widespread 90s for the next few days

BETTER THAT THEY ARE ON THE ROAD. NICK: HOTND A HUMID, T 2HE -- HAZY AND HUMID, WE GET ALL OF THAT. 72 DEGREES WARMER THAN YESTEAYRD MORNING THIS TIME. THE 12-HOUR FORECAST, UNLIKELY WE WILL SEE AS MANY PUBLIC SHOWERS THIS AFTERNOON AS YESTERDAY, SO MAYBE -- POP UP SHOWERS.

Coldplay - Higher Power is the song of the day and this is the OPEN THREAD for right now.