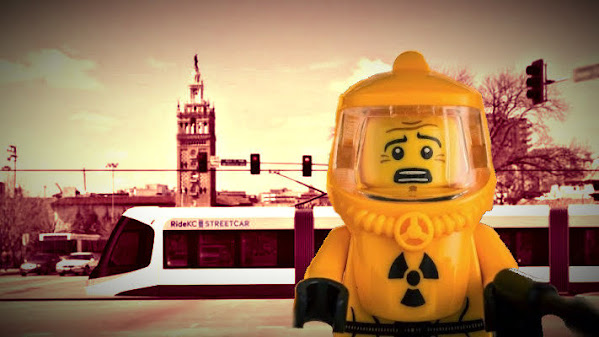 Check progressive media attempting to promote the busted mode of transit and smooth things over with the gullible . . .

A donation to The Beacon goes beyond the newsroom. We amplify community voices, share resources and investigate systems, not just symptoms. The Beacon in your inbox. In-depth reporting delivered every Tuesday and Thursday morning. Starting July 1, some Kansas City residents will begin paying a new tax. Its purpose?

Meanwhile, our more savvy readers direct us toward power concerns and a sign that streetcar tech isn't built to withstand extreme weather . . .

It has been so hot in Portland, Ore., in recent days that streetcar power cables are melting, bringing transit service to a halt for days. Portland Streetcar shared a photograph of one of the damaged cables on Twitter on Sunday, and the image is quickly becoming a symbol of an anomalous heat wave that has gripped the Pacific Northwest for days.

Thoughtful quote from our progressive friends that actually supports conservative criticism of this mode of transit . . .

"The extreme climate change heat has fried the overhead wires of the Portland streetcar?  I find that amusing.

"And they also had to shut down their electric powered metro rail because of the drain on the overworking electric grid during this extreme heat wave.

"But I’m sure the buses are probably still running.  With climate change now a reality, the streetcar extension to UMKC should be interesting."