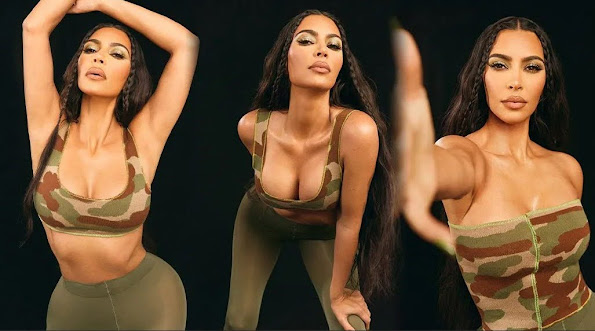 Hottie Kim K keeps up with her fitness in an important bit of cleverly disguised merch promo as we check community news, pop culture and top headlines.

KANSAS CITY, Mo. - Women are helping build four new homes on the city's east side, which had been postponed during the last year because of the pandemic. Habitat KC's Women Build Initiative is based in the area near 26th Street and Olive Avenue.

Missouri lawmaker says 'each day is an atrocity' for Kevin Strickland

KANSAS CITY, Mo. - Apologies are 43 years too late for Kevin Strickland, who has spent more than half of his life behind bars for murders prosecutors say he did not commit. "It's important when instances like this arise that you do everything you can to try and right the wrong," Rep.

'Past due' letters are not fraudulent, Overland Park Fire Department says

OVERLAND PARK, KS (KCTV) -- The Overland Park Fire Department says a number of residents and businesses have received a letter from the department informing them that their commercial fire alarm systems are past due for inspection.

They may be getting divorced, but there's apparently no love lost between Kim Kardashian and Kanye West.

The Senate voted 68-32 on Tuesday to approve a sweeping China-focused global competition bill, overcoming Republican objections that had threatened to derail the $200 billion+ bipartisan package. Why it matters: The bill's supporters cite the measure as evidence that the deeply divided Senate can still function on a bipartisan basis, despite the last-minute chaos that forced Majority Leader Chuck Schumer (D-N.Y.)

Kamala Harris slammed for 'cringe' response to border questions: 'Not a joke to laugh at'

Vice President Kamala Harris received a swath of criticism Tuesday following her awkward response to questions about the ongoing border crisis. Harris was asked by NBC's Lester Holt when she would be visiting the border, a question asked since she took over management of the border crisis for the Biden administration in March.

Those in power are bound to be political targets. So when French President Emmanuel Macron was slapped in the face by an angry agitator, he was not the first leader to be subjected to a political attack that escalated to a physical one.

Photo by Annie Theby Record Store Day is upon us once again and we couldn't be happier. COVID-19 restrictions are disappearing with every vaccine shot in the arm, so you'll be able to shop for those one-day-only exclusives in person. Stop by record stores June 12 and take a look at the variety of different records to choose from.

After two years of construction, Charlotte Street's revamped mega-enclave for artists is set to open to the public this coming weekend. The new campus-designed by the local architect firm Hufft-is being touted as a multidisciplinary, multifaceted facility that sets a new national standard for collaborative artist incubators.

Next few days will be hot

Spotty showers are possible Tuesday evening, then it will mostly clear with lows near 70. Wednesday through Friday will be very hot and humid with highs in the low 90s and heat index levels in the mid-90s. Rain chances will be limited with our next chance coming on Friday.The heat and humidity will linger into next week.