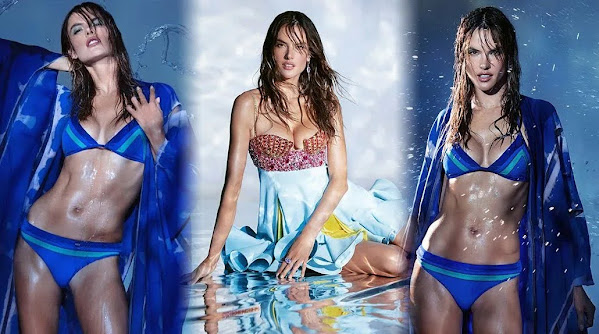 Apropos for #TBT we share a newsworthy peek at former angel hottie Alessandra as she continues her modeling career into her 40s and inspires today's peek at pop culture, community news and top headlines.

This is an inside look at two scientists from the Kansas City area who worked on producing COVID-19 vaccines. One is a veteran researcher who worked during the AIDS epidemic and whose research is the foundation for mRNA vaccine production. The second is a young researcher whose career began with producing a vaccine during the COVID-19 pandemic.

KANSAS CITY, KS (KCTV) -- You can get a warehouse job at Nebraska Furniture Mart with a starting pay of at least $18.30 an hour. As many people advocate for the government to raise the minimum wage to $15 an hour, the furniture super store is just one of many employers raising wages on their own.

KANSAS CITY, Mo. - UPDATE 7:55 a.m. | No injuries were reported at the fire. This morning crews responded to 5840 Swope PKWY, as an auto alarm, prior to arrival the incident was upgraded to a structure fire to an abandoned school. Crews are still actively defensive in putting out the fire.

PRAIRIE VILLAGE, Kan. - A wrongful death lawsuit could be headed to the United States Supreme Court. It's against Prairie Village care facility Brighton Gardens. You may remember there was a COVID-19 outbreak at the height of the pandemic, infecting more than 100 residents and killing 25 people.

KANSAS CITY, Mo. - Democratic Senators who hoped to begin debate on a bill to standardize election laws were thwarted Tuesday when a 50-50 party-line vote blocked discussion on what Kansas City-area Republicans called a "power grab." Sen. Jeff Merkley (D-Oregon) introduced S.1, the For the People Act, in March.

Alessandra Ambrosio, 40, shows off impressive abs while in a bikini

Alessandra Ambrosio shared several bikini photos to her Gal Floripa Instagram page this week where she was modeling a new bikini from her Underwater Dream Collection for summer. The siren from Brazil had on a white and pink number with frills here and there making it extra feminine as she held on to a cocktail with the shell of a mango as her cup.

'We have a deal': Biden reaches infrastructure compromise with bipartisan group of senators

WASHINGTON - President Joe Biden and a bipartisan group of 21 senators reached a compromise Thursday to modernize the nation's deteriorating transportation and public works systems, putting the president on track to pass the first plank of his sweeping infrastructure and family agendas.

Cohen replied that DHS is not aware of any specific, credible threats of violence linked to the conspiracy theory about Trump being reinstated. But he added that DHS is following discussion of the topic online among extremist communities.

House Speaker Nancy Pelosi announced Thursday she will create a select committee to investigate the January 6 attack on the Capitol after Republicans blocked the formation of an independent commission.

Russia warns West "we can bomb" after Black Sea spat with U.K warship

Russia has warned that it could resort to bombing if its borders are not respected, as a dispute grows between Moscow and London over a Royal Navy destroyer in the Black Sea.

Israel says the Delta variant is infecting vaccinated people, representing as many as 50% of new cases. But they're less severe.

As many as half of new COVID-19 cases in Israel are vaccinated people, a health official suggested. The Delta variant, not as easily beaten by vaccines as other variants, is driving Israel's surge. Although Infections among vaccinated people have alarmed Israelis, the infections appear to be milder than they are in unvaccinated people.


Tech Dude Posts From Beyond Grave

Photo Illustration by The Daily Beast/Photos via Getty/InstagramAn Instagram post uploaded after John McAfee's death was announced Wednesday appeared to be a shoutout to the QAnon conspiracy theory, turning the apparent suicide in prison of a notorious software impresario into a surreal moment while sparking a frenzy of baseless speculation.Posted around 4 p.m.

The world is still reeling from yesterday's revelations after Britney Spears' conservatorship case hearing. Speaking out publicly for the first time about her conservatorship, Spears revealed just how extreme the restrictions placed on her have been over the past 13 years as she asked the court for control back over her estate and personhood.


General Claps Back Against Congress

Gen. Milley Fires Back at Gaetz's 'Offensive' Question, Leaving Him Shaking His Head

Finding himself in the news for non-sex-scandal-related matters on Wednesday, Rep. Matt Gaetz (R-FL) was left flustered and shaking his head when Army Gen. Mark A. Milley, the chairman of the Joint Chiefs of Staff, delivered a blistering retort to the MAGA congressman's criticism that the military is too "woke."

Athletics has not always been a space where Jared Horman felt comfortable, he shared; but through Stonewall Sports, he discovered a way to genuinely enjoy games while connecting with other queer individuals and allies. "We get to kind of reclaim this thing that was terrifying for us as children," said Horman, who was first introduced to Stonewall Sports in 2015 while working in Charlotte, North Carolina.

Holland blows save as Royals fall to Yankees 6-5

The Royals were walked-off by New York, 6-5, on Wednesday, as Greg Holland blew his fourth save of the season. After a nail-biting finish on Tuesday night, Kansas City looked to pounce on Yankees starter Michael King in the early going. Thanks to Ryan O'Hearn, the Royals did just that.

A paddlefish caught on Keystone Lake in Oklahoma broke a new world and state record, according to the Oklahoma Department of Wildlife Conservation.The 164-pound paddlefish was caught on Tuesday, officials said. Grant Rader of Wichita, Kansas, caught the fish with the help of Jeremiah Mefford with Reel Good Time Guide Service.


Bad Weather On The Way

Rain this morning has cleared out for the most part, but we're not done with the severe weather threat just yet. A couple of different fronts in the region will be the focal point for our storms to develop again later this evening. We'll look to the north as the cold front approaches for [...]

Billboard #1 in 1991 Paula Abdul's "Rush, Rush" is the song of the day along with the garbage video featuring Keanu Reeves and this is the OPEN THREAD for right now.