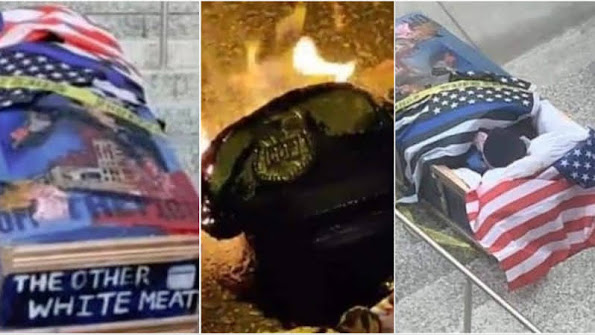 Our blog community has shared enough images of recent protest, right now these words from a Kansas City cop's wife are some of the most powerful we've read in recent days.

Without too much prelude, here's alternative 1st person testimony sent our way directly from the source . . .

Last week I attended a rally to support the blue defending the brave men and women of KCPD from being defunded.

Later that week "protesters" stood at headquarters next to the Police memorial that was covered with "Black Lives Matter" signs and other anti-cop hate.

As I watched a live stream of the protest, I saw a large box behind the speaker. When I got a good look at it, I read that the bottom says, "the other white meat". With the flags on it I quickly realized it is supposed to be the coffin of a dead Police Officer. After additional pictures were obtained, I was told it was an actual pig dressed in a Police uniform. How absolutely disgusting and disturbing that THAT was a part of their message.

They marched through the streets of downtown spewing their lies and their hate all in the name of justice for a situation, no, actually an ACTIVE investigation they know NOTHING about. Then when they returned to the statue, they lit on fire what was inside the coffin which was a pig in a Police Officer uniform and danced around it as it burned yelling "f*ck the Police".

These are the people my husband and his brothers and sisters in blue are surrounded by in the most violent neighborhoods with which they serve. They are the population with the most crime and they are the ones that resist working with the Police to fix anything, but instead stay a part of the problem. These are the people that will be the last to help an officer, but the first to call when THEY themselves need help.

These are the people that could put my husband into a real life coffin and for what? It isn't for a city that loves or appreciates or even really gives a damn about him.

It's because he gave this city an oath to serve and protect. An oath that he and his brothers and sisters in blue take so seriously that they would lay down their lives for you without pause. He would sacrifice his life, leave our two boys fatherless, and the love of his life brokenhearted and alone to save you without pause.

If you don't stand behind the blue feel free to stand in front of them. I am tired, no exhausted, from the mental and emotional drain of watching my husband leave our home not knowing if he will be the next Officer killed. God forbid I get that knock, but if I do, his blood will be on the hands of the Mayor, 8 city councilmembers, and JPB for allowing reckless and sick behaviors from these people like THIS to happen. "Protest" or not, this crap is unacceptable and harassment to our Officers at the very least.