Kansas City News Slide Back To The Grind 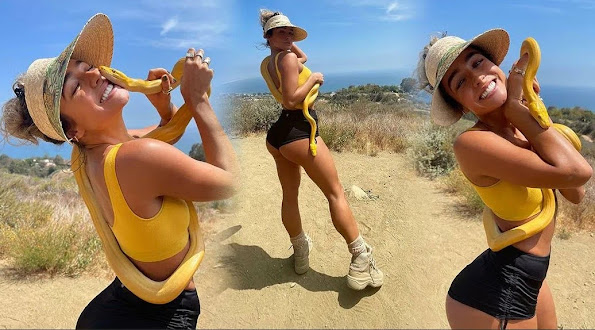 Right now hottie Sommer showing off her wares inspires us to share these morning news links on the topic of pop culture, community news and top headlines

Shut Off From The Stage, A South Kansas City Theater Class Pivots To Podcasts

In the spring of her junior year at Center High School in south Kansas City, Eleanor Peoples finally got the lead in a play. She'd been in the theater department for three years, and she was really excited.

6:00 AM ET Adam TeicherESPN Staff Writer Close Covered Chiefs for 20 seasons for Kansas City Star Joined ESPN in 2013 KANSAS CITY, Mo. -- Defensive coordinator Steve Spagnuolo immediately laid out the priority for the Kansas City Chiefs in the first team meeting of the offseason. The players could have guessed it.

The Colorado native, delivering her pool fashion without a hitch, nonetheless took a moment to show that the new two-piece still had tags on, and they were visible. "Tags out lol," she wrote as the reptile continued to snake its way across her torso.

Jeff Bezos is going to space

Jeff Bezos will be flying to space on the first crewed flight of the New Shepard, the rocket ship made by his space company, Blue Origin. The flight is scheduled for July 20th, just 15 days after he is set to resign as CEO of Amazon.

Vice President Kamala Harris' flight was grounded 30 minutes after takeoff Harris was headed to Guatemala City to discuss the causes of migration Harris' flight was delayed two hours Vice President Kamala Harris' first trip abroad to Guatemala and Mexico got off to a rocky start Sunday, when a technical issue grounded the plane after about 30 minutes into the flight.

Manchin breaks from Dems on S1 election bill: 'Wrong piece of legislation' to unite US

Sen. Joe Manchin , D-W.Va., explained why he will vote against his Democratic colleagues' far-reaching election bill, the "For the People Act," on " Fox News Sunday." "It's the wrong piece of legislation to bring our country together and unite our country, and I'm not supporting that because I think it would divide us more.

"It's a tough layer that we have to address - it requires relationship building and it's going to take a little longer," said Octavio Martinez, executive director of the Hogg Foundation for Mental Health, who sits on the White House's Covid-19 Health Equity Task Force. "We have a systemic issue here."

'A Trying Time is No Time to Quit Trying': Miley Cyrus Reflects on Fame, Fashion, and Family

You recently dedicated a post to the fourth anniversary of " Malibu," one of your most open, vulnerable love songs. How does music help you make sense of life, love, loss, joy, sorrow and everything in between? I'm a believer that everyone's suffering is different.

90.9 The Bridge celebrates Pride Month by recognizing the LGBTQ+ community through music and stories. Stay tuned for special programming! You can also celebrate the month with the choices you make! All month long, The Bridge is partnering with LGBTQ+ owned businesses to elevate agencies across Kansas City.

Hundreds from the LGBTQ+ community and its allies came out to Gilham Park on Sunday afternoon for a friendly round of kickball. Stonewall Sports KC, a non-profit dedicated to providing a safe recreational place for queer individuals, hosted the event.

Classic June day ahead, warm and humid with chance for pop-up evening storms

Hide Transcript Show Transcript OF THAT WE'LL PASS IT ALONG. YEAH SUMMERS DEFINITELY HERE TO IS AND I MEANHA TT IS A BEAUTIFUL SUMMER SUNRISE THERE. ISN'T THAT PRETTY COME ON OVER REAL QUICK. I KNOW YOUR MORNING'S BUSY. COME ON OVER. I'LL HOLD IT UP HERE FOR A MINUTE OR TWO MORE LIKE 10 SECONDS.

The Kid LAROI, Miley Cyrus - WITHOUT YOU is the song of the day and this is the OPEN THREAD for right now.