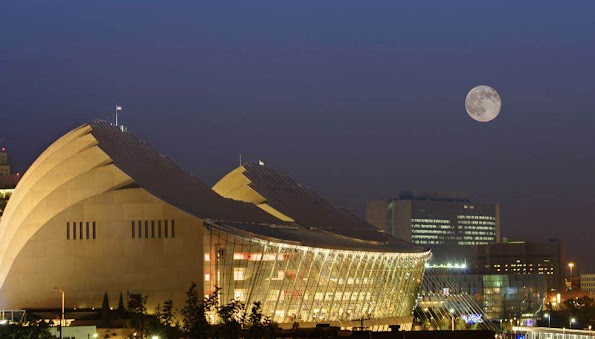 For our most dedicated denizens of the discourse we share this collection of links on the topic of pop culture, community news and top headlines . . . Check-it . . .

Shelter KC, Church of the Resurrection to provide hot weather kits to those in need

KANSAS CITY, Mo. - Shelter KC has a plan to help those experiencing homelessness beat the searing heat. The shelter, which has been helping people for more than 70 years, is working with Church of the Resurrection Downtown to make 500 hot-weather kits.

KANSAS CITY, Kan. - The Kansas City, Kansas Police Department released cell phone video Wednesday night of a sideshow that turned dangerous Sunday night. The car in the video struck a man of the crowd, sending him to the hospital with serious injuries, according to police.

Hide Transcript Show Transcript YOU NEW TONIGHT A SHOOTING IN OVERLAND PARK SENDSNE O MAN TO THE HOSPITAL. IT HAPPENED AT AN APARTMENT BUILDING AROUND 85TH AND FARLEY STREET AROUND 7:00 TONIGHT. THE VICTIMS CONDITION IS UNKNOWN AT THIS TIME DETECTIVES ARE TALKING WITH WITNESSES TO F Police in Overland Park, Kansas, are investigating after a man was shot Wednesday evening.

Biden snaps at reporter over Putin question: 'You're in the wrong business'

President Biden snapped at a reporter at the end of his press conference Wednesday in Geneva after she asked why he was "confident" Russian President Vladimir Putin would change his previously malign behavior. Biden, who was walking away after saying he was committed to freeing Americans imprisoned in Russia, whirled around at his questioner and said, "I'm not confident he'll change his behavior.

Widespread excessive heat warnings and heat advisories are in effect for California, Nevada, Arizona and Utah. "Dangerous and record-breaking heat to continue across portions of the West and Central Plains," the National Weather Service (NWS) said. "A few monthly and even all-time records have already been tied/broken this week associated with the current stretch of heat," the agency added.

Texans will be able to carry handguns in public without a license on Sept. 1 under 'constitutional carry' law

Texas Gov. Greg Abbott signed a "constitutional carry" bill into law on Wednesday that will allow Texans to carry a handgun in public without a license starting on Sept. 1. Under current law, residents must go through training, submit fingerprints, show handgun proficiency and pay a $40 application fee in order to obtain a license to carry a handgun.

North Korean dictator Kim Jong Un has warned of potential food shortages in the Hermit Kingdom as photos showing his own weight loss are scrutinized by analysts around the world.

The science around the lab leak theory hasn't changed. But here's why some scientists have.

Alina Chan isn't saying the coronavirus definitely leaked from a lab in China. What she is saying is something that more scientists have grown comfortable discussing publicly: There's no clear evidence either way.

In the new video for "Need to Know," a single off the upcoming album, Planet Her, Doja Cat playfully grinds the air to dance in her undies, then plays her PlayStation 5 alongside her troupe of baddies. The small detail is yet another example of how the pop artist and TikTok viral sensation threads video games into her work.

The KC Royals are maddeningly set in losing ways

Adalberto Mondesi hit a home run for the KC Royals against Detroit Wednesday afternoon. So did Salvador Perez. The Royals scored first, and even led for three innings, feats they've rarely accomplish lately. But in the end, Kansas City lost again.

KANSAS CITY, Mo. - A dog found with severely matted fur and other health issues is on the mend thanks to a Good Samaritan and KC Pet Project. The dog, now named Simon, was dropped off at KC Pet Project on Monday morning by someone who found him on the side of the street.

UNTIL THE SUN SETS THEN IT'LL START TO FEEL BETTER. STILL HOLDING NEAR 90 TO 8 PM SUNSETTING JUST BEREFO NINE O'CLOCK THIS EVENING ABOUT 83 DEGREES BY 10 80 DEGREES HEADING TOWARDS MIDNITGH A QUIET EVENING, BUT AS WE HAD TOWARDS OUR MORNING TOMORROW, SOME OF US MAY GET SOME RAIN.

And this is the OPEN THREAD for the late night & early morning. Hopefully, we'll have even more news, dumb jokes and fun times for the next update . . . STAY TUNED!!!