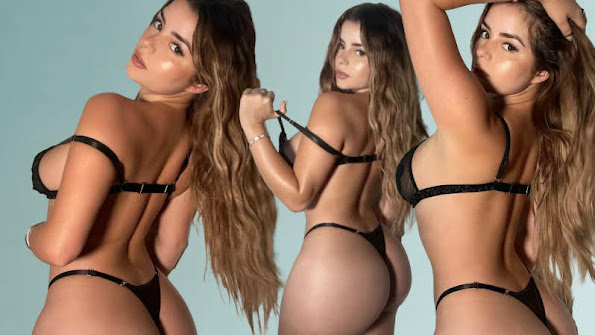 Right now we take a peek at the upward career trajectory of hottie Demi along with a bevy of pop culture, community news and top headlines.

KANSAS CITY, Mo. - A woman suffered life-threatening injuries in a shooting Thursday night in Kansas City, Missouri. The shooting happened about 10:50 p.m. in the parking lot of a convenience store at 3201 Independence Ave. No word on what led to the gunfire.

KANSAS CITY, Mo. - AMC stock is shaking up Wall Street thanks to millions of individual investors. The Leawood-based company's stock reached record highs Wednesday. According to CNBC , the stock closed at an all-time high of $62.55 per share. Its previous closing record had been $35.86.

She is currently soaking up the sun in Ibiza. And Demi Rose sent temperatures soaring as she took to Instagram on Thursday to share a slew of racy bedroom snaps. The model, 26, showcased her famous curves as she posed topless in a cream cardigan and high-waisted knickers.

"We've seen this dynamic over and over again where Democrats are effectively negotiating with themselves, watering down their own package, not in exchange for votes but in exchange for the hope of keeping the negotiations going," said Leah Greenberg, a co-founder of the liberal organization Indivisible.


Social Media Cracks Down On MAGA

Facebook is planning to end its policy that shields politicians from content moderation rules, the Verge reported on Thursday. The reported change comes as Facebook is expected to announce its response to recommendations made by the company's oversight board when it ruled on the firm's suspension of Donald Trump.

Sen. Rand Paul, R-Ky., took another jab at frequent foe Dr. Anthony Fauci on Thursday following reports that the infectious disease expert's upcoming book was pulled from online stores. Listings for the book, titled "Expect the Unexpected: Ten Lessons on Truth, Service, and the Way Forward," were removed from Amazon and Barnes & Noble's websites on Thursday.


Ben Has Been There, Done That

Ben Affleck looked satisfied upon leaving Jennifer Lopez's house Wednesday morning. The "Way Back" star was photographed in his car with quite the smirk on his face as he departed her Los Angeles pad.

Rating All the Snacks in Billie Eilish's New Music Video

The Kansas City's Salvation Army is teaming up with Westlake Ace Hardware for a ninth straight year to try and keep folks cool this summer.Westlake stores are taking cash donations at the register or rounding up purchases through June 20 to buy fans at cost and donate them to the Salvation Army.The Salvation Army's Maj.

Warm, sunny for your Friday

Temperatures will drop back into the mid-60s overnight. Friday will be sunny and warm. Look for a high near 84 degrees. As we approach the weekend, we will have to deal with a rise in humidity, so it will be a bit muggy by Sunday.

Billie Eilish - Lost Cause is the song of the day and this is the OPEN THREAD for right now.

Thanks for making it this far!!!