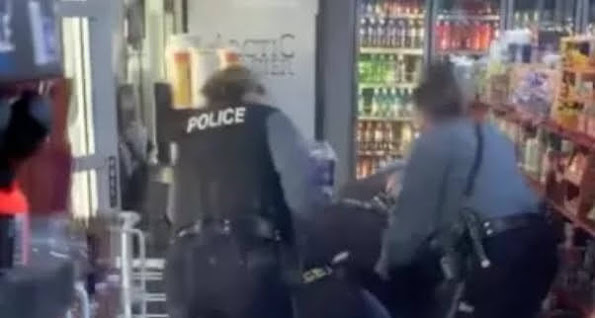 More "new video" has been released to the media regarding a deadly police shooting that's still under investigation.

DO YOU SEE AN EXECUTION OF THIS SUSPECT UNDER SURVEILLANCE FOR A VIOLENT ASSAULT?!?!

TKC doesn't want to dismiss concerns about police brutality. It's an important subject that EVERYONE is taking seriously.

But claims of an "execution" aren't supported by the video that just looks like another angle of a chaotic struggle.

The theory that the suspect couldn't reach for a gun in a dog pile is nonsensical and defies the experience of anyone familiar with firearms.

Still, we want to be fair.

Ministers have garnered headlines across the metro and their claims have resonated with activists despite a dearth of evidence.

Here's the latest with new video that doesn't offer any more proof of scathing indictments . . . In fact, it just looks like a blurry mess.

KANSAS CITY, MO (KCTV) --- Another video has surfaced from inside a gas station where a Kansas City man was shot and killed by police back in March. It's the third video this week that's been released by faith leaders. That day in March, Malcolm Johnson was killed by a police officer and an officer was shot in the leg.