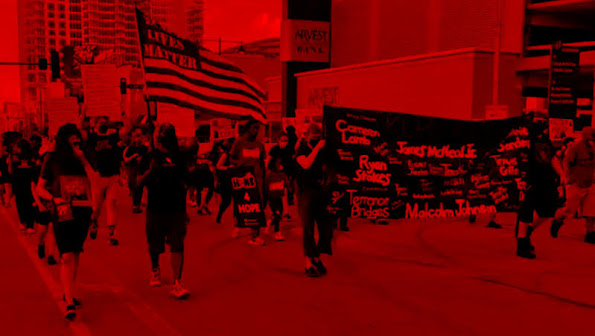 Thankfully, it was a totally peaceful protest and not just a "mostly peaceful" event. There were at least a couple of hundred people at the peak of the demonstration that culminated with speeches outside of KCPD HQ.

KANSAS CITY, Mo. - On Friday night, local activists marked one year of weekly protests in Kansas City following the murder of George Floyd by Minneapolis police. The group has been pushing to raise awareness about local police brutality and killings and continuing its calls for change.

For over a year, protesters have been gathering in front of Kansas City Police Department demanding change within the department. On Friday, organizers held another protest to culminate their yearly effort. "We have police problem here in Kansas City, so we should go the police headquarters," said Steve Young, an organizer.

KANSAS CITY, MO (KCTV) - For a year, a group of people who want to see a change in policing have gathered outside Kansas City Police Headquarters on Friday nights holding signs with the names of local residents killed by police. It started one week after George Floyd's death.

KANSAS CITY, Mo. - Days after videos emerged of a shooting in which a Kansas City, Missouri, police officer killed a 31-year-old man , dozens of people came together on the anniversary of local protests that ignited following George Floyd's murder. Friday's protest was expected to begin around 6 p.m.