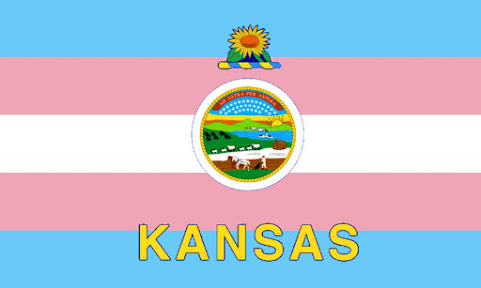 The Sunflower State achieves an important but probably temporary milestone in the culture war today.

This hotly contested topic should keep everyone distracted from stop asking questions about the busted employment system that has kept TENS OF THOUSANDS of workers on edge throughout the course of the pandemic. Never mind the widespread FAIL to preserve the social safety net and pay workers the cash they put into the system represents one of the biggest BIPARTISAN disappointments in administrative and political leadership the state has seen since The Great Depression.

The reality is that when times got tough neither Republican nor Democratic Party politicos could help Kansas workers locked out of a system that quickly collapsed amid the pandemic and under their watch.

But, by all means, let's pretend that high school sports are the most important problem confronting voters . . .

The tally was one vote shy of overriding in the Kansas Senate, which stopped progress before the House could take up the measure. That means transgender athletes can continue to compete on female sports teams at Kansas public schools and universities contingent on league rules on the matter.

Opponents of the bill had argued the ban targeted transgender students who already often face harassment.


Have to say Caitlyn Jenner aka Bruce is right. Putting an man turned woman in a woman's sport is just wrong they are stronger because they are men. So again woke crazy Americans are ruining all things for everyone else. Pretty soon there will be nothing else left for anyone.

Only Libtards would enjoy destroying the sports of biological girls/women to satisfy .0007% of the population. Similar to their limits on illegals flowing across the border, there are no limits to their stupidity. Governor Granny needs to go.

And yet this issue is unlikely to affect many people or schools and is the modern-day equivalent of the GOP's attention-deflecting "God, guns, and gays." Weird. Hold on to your wallets!

The Demoncraps are good at crapping on millions of women to satisfy a few people trapped inside the bodies they don't want.

Biological women are the only women there are. Only men and boys who can't compete and win against their own gender enter into women's sports so they can cheat and win. They are the most despicable and vile men on the planet.


yep..now tons of giggly Democrap "males", who can't compete against other dudes, will scam millions in college sports scholarships that they'll steal from "real" females..


I'm all for allowing them in..with only just one requirement:

chimpy d I thought Kansas is a conservative state

Chimpy d p the northland is the new southland

What a fuckin dump that place is

Ask yourself this important question...why do men want to compete against women? Trans women are not women. We will call you whatever you want out of respect for feelings but men are men; and women are women. They simply don't qualify to play against natural women. No bit of manipulation will or should change that.

The should have to ID themselves as Tranny on their uniforms. That way you know which team and who is cheating.

For the life of me I don't understand how women can support such stupidity. I have heard for years women complaining to not having as many chances as men in the field of sports to turn around and now want men acting as a women to compete in the same areas of sports they have tried for so hard to see happen.

They should be in a third category for any sport they want to participate in. This is what happens when Kansas votes for a Libtard governor.

Just look for the bulge cupcake!


These legislators better get their crap together and ban this immediately.

Lucas's "wife" has a penis.

THE DEMOCRATS WILL END IF THE COVER UP RHINOS ALLOW IT

BILLY. JEAN WILL STOMP YOU LIB DYKES ASSES ON THE US SOCCER TEAM

TRANNYS will sue pro sports out of business.

We are trans not trannies you idiot.

Transbabe, go run your track race against another transbabe or transboy. Problem solved. Quit imposing your ignorance on others.

TRANNIES ARE SICK AND DISGUSTING DANGEROUS FUCKS WHO DON'T BELONG IN WOMENS' RESTROOMS OR SPORTS. GO FUCK YOURSELF YOU UGLY TRANNIES. NO ONE WANTS YOU SICK FUCKERS AROUND

Trannies are mental defectives and degenerates who don't belong in polite society. That is why Degenocraps are trying to mainstream them and destroy women's sports and private spaces by foisting their sickness on the rest of us. Fuck all trannies and fuck all degenocraps.

Because in a World with no jobs, no economy, no lives and little happiness, we worry the most about chop dicks with wigs getting to play the " I can beat a little woman out " just not be the Man you were born to be. -Confused much ?

Hey TRANNYBABE. Whenever I see bulges in place they don't belong, I smash them with a hammer. Any unwanted bulges in a woman's restroom gets a face full of pepper spray at a minimum. Have a nice day.

Trannybabe, I'll take care of that ugly bulge for ya. I got a nice big carving knife with your name on it, tranny.

Super Dave, most women, including feminists, don't support trans ideology. But this current crop of tranny "activists" are violent and insane and women have been physically threatened by them and deplatformed from social media like Twitter, YouTube, FB, etc. JK Rowling is a good example of someone who has been cancelled by these toxic sickos. Leftists are a global scourge and must be wiped out completely. Let's start with trannybabe. I want first go at him.

No,you are mentally deranged...fixed it for you,now go take a shotgun and do us all a favor

I can't wait until feminists start feeling like victims of the trans agenda.

Eventually all sports will become mixed and there will be no biological women left in sports... Then people will cry that there needs to be women's sports again... Rinse and repeat.