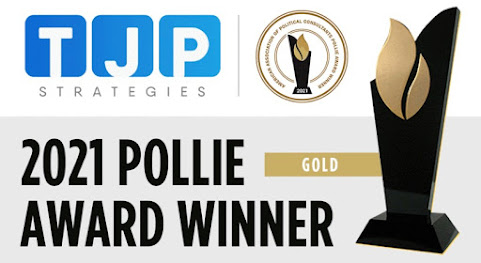 Posted because we think it's useful to remind denizens of the discourse that politics is also a business with power players, rising stars and a great deal of creative talent.

Kansas City, MO – TJP Strategies, the largest Democratic direct mail firm in Missouri, has been awarded two national Pollie Awards from the American Association of Political Consultants (AAPC), the industry’s highest recognition for political work. TJP was given the key distinction of Gold for Best Use of Negative or Contrast in Direct Mail, as well as Bronze for its use of direct mail in the high-profile race to defeat disgraced former Representative Rick Roeber.

“2020 was a record-breaking year for award nominations, which only further makes the case that TJP’s work consistently competes as some of the best work in the country among both Republican and Democratic firms," said Patrick Shami, managing director for TJP Strategies. “This would not be possible without our exceptional team of both creatives and consultants, a team that grows together and gets better every election cycle.”

About the Pollie Awards
The Pollie Awards (Pollies) are bipartisan honors awarded annually by the American Association of Political Consultants (AAPC) to members of the political advertising and communications industry who have demonstrated superior work on behalf of their candidates and causes. Esquire magazine has dubbed the Pollies, “…the Oscars of political advertising.”