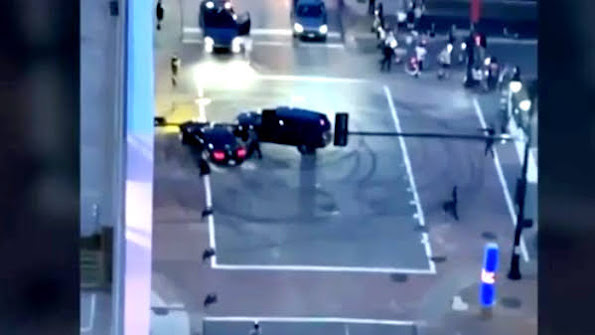 "A big FU this weekend to new ordinance, @MayorLucasKC @kcpolice as the street racing was bigger than ever on Saturday evening in downtown & in front of Union Station plus the biker caravans running red lights all thru town. Many endangered."

Accordingly, we rewatch this clip and notice a street racer nearly hit a cop . . .

Just before 10 p.m. Saturday near Union Station in Kansas City, dozens of cars gathered in a nearby intersection, did donuts and participated in a side show.Within minutes, police showed up and the crowd scattered.

KANSAS CITY, Mo. - Street racing is an increasingly dangerous problem that's picking up speed in Kansas City, Missouri, despite its city council passing an ordinance Thursday to ban the side shows and their audiences. "A lot of people have contended that yeah we should just provide a place for people to do this.

Moreover, this Swope Park clip reveals a dangerous scene over the weekend wherein stunt drivers swerved into the crowd . . .