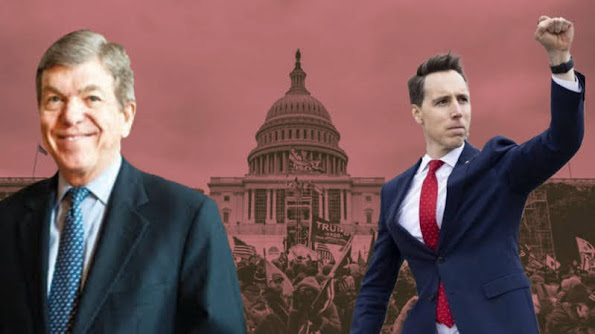 Aftermath . . . Missouri politicos oppose Democratic Party efforts to uncover the motives behind the MAGA panty raid that rocked the world.

Missouri Politicos Side With MAGA

As lawmakers push ahead to create an independent commission to investigate the Jan. 6 insurrection at the U.S. Capitol, two well-known conservatives from our region have different views on the commission.One of them is U.S. Sen. Josh Hawley of Missouri. The image of his clenched fist gesture to the crowd that morning made national news.The other is former U.S.

Let our journalists help you make sense of the noise: Subscribe to the Mother Jones Daily newsletter and get a recap of news that matters. On January 6, the day Congress was scheduled to certify the electoral votes in the 2020 presidential election and declare Joe Biden the victor, thousands of supporters of President Donald Trump stormed the US Capitol.

The House passed a bipartisan bill Wednesday to create an independent commission to investigate the Jan. 6 insurrection at the U.S. Capitol as the chamber’s GOP leaders lobbied against its passage.

Shortly before the vote, Tim Ryan, an Ohio Democrat, said on the House floor: "We have people scaling the Capitol, hitting the Capitol Police with lead pipes across the head, and we can't get bipartisanship? What else has to happen in this country?"

It makes no sense to expect congressional Republicans to be willing partners in any effort to investigate the Jan. 6 Capitol attack that the FBI has labeled domestic terrorism. Their former president's partisans stormed the building, and they themselves are trying to erase history. Exhibit A: Rep.

A Virginia rapper "Bugzie the Don" faces federal charges after he used a photo of himself at the Capitol riot on an album cover. Antionne DeShaun Brodnax released his album cover, which features him sitting on a SWAT car in front of the Capitol. He was charged on four counts, including unlawful entry and misconduct.