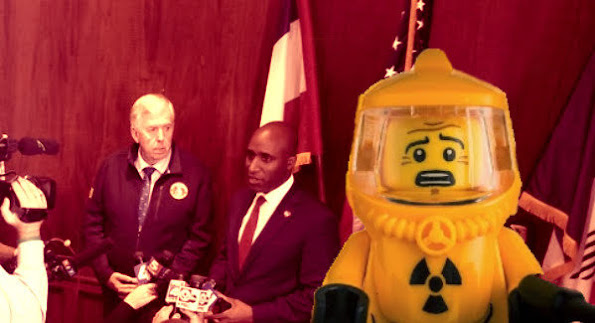 Word from Jeff City is that the Guv will sign a po-po bill that will create yet another division betwixt KCPD and community.

The guv's people have already started calling KCMO politicos, preparing them for the inevitable.

Nearly every local legislator disapproves of the effort and we're convinced that this is one of the clearest signs that our Republican friends in rural Missouri would like to see Kansas City burn.

There's no indication this will help with recruiting.

The silence from KCPD on this topic and support among a few local politicos in the Northland indicates that po-po want to get out of KCMO.

The reality is that this is the beginning of the end residency requirements in KCMO altogether.

The Missouri House of Representatives Thursday approved the massive bill, which bans most usage of police chokeholds, and includes provisions for stalking.

The final vote for the measure, which also removes the requirement that Kansas City, Missouri, police officers live in KCMO, passed 140-4.

Under current state law, police officers in Kansas City must live within city limits of Kansas City, or must move to Kansas City within one year of starting at the police academy.

Kansas City Mayor Quinton Lucas criticized the removal of the requirement in the bill, saying it's important for police to live in the community in which they serve.

"This legislation does not save a life, it does not mentor a child, it does not take a deadly weapon out of the hands of a repeat offender," he said." This legislation instead turns a blind eye to the interest of Kansas Citians. It drives a wedge between our community and our police at a time when we have new challenges seemingly every week."